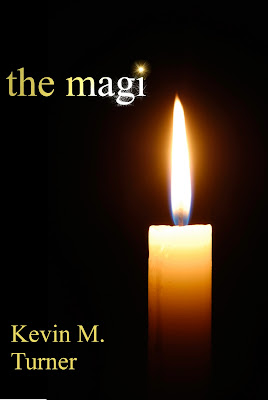 The Magi is the debut book of author Kevin Turner.
Cover blurb:
Thirteen-year-old Elijah Hawk has been on the move ever since the night his family was murdered.  His unique sense of instinct saves his life on that horrible night, but he has the feeling that since then, he is being followed.  Suddenly, during a rather awful stay at a northern boarding school, Elijah stumbles upon a secret world.  The world of the Magi.
He learns that the Magi are a simple people with a very complex power.  They agree to look after Elijah and let him train with their power as long as he promises to use it only to protect others.  But when a powerful group of men storm the Magi city and demand that Elijah be handed over, who will protect him?

What an exciting book! This read gave me the same thrill and satisfaction as the first Harry Potter.
Elijah (main character) really came to life for me. Often in fantasy books, the hero is made of iron, and only slightly affected by sadness. But when Elijah experiences his own tragedy, his grief was very realistic. I would liked to have seen Elijah's friends, Samuel and Hannah, developed a bit more, but I really enjoyed reading Paul, who was a perfectly loyal rascal. Elijah's mentor, Olivia, came across as very majestic, and I loved the Roddick's two girls. They were quirky and so cute!
Characters: 4 Stars
From the very first page, this book catapulted me into action after action, and added a fun, new spin on an old piece of culture. The secrets promised delivered to the full extent, and throughout the whole book, I got the feeling that Turner wasn't going to take the easy way out! I'll eagerly be awaiting the sequel!
Plot: 4 Stars
I could tell this was a first book, and sometimes it was a little hard to follow, but overall, I was very impressed! The world was very cohesive, and loose ends that may have been forgotten in other books, were neatly tied up! :)
Style: 3.9 Stars

Subnote: The first five chapters of The Magi are offered on the Author Site, and I highly recommend you check them out! :)
Posted by Aliah E. at 4:21 PM