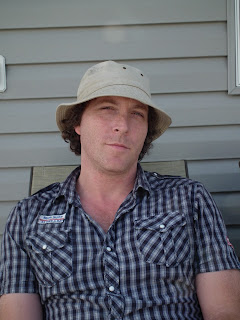 Lloyd Poast is a former staff writer for Consequence of Sound and Hockey Future, as well as the author of several short stories that have appeared both online and in print. Blink is his first novelette.  He lives in Canada with his wife and two young boys.

Favorite reads?
I love pretty much anything by Neil Gaiman and Ray Bradbury. I also like Heart Shaped Box by Dan Hill and Summer of Night by Dan Simmons. I actually just finished Vince Neil’s biography and am now reading The Land of Laughs by Jonathan Carroll and they’re both great.


Inspirations for the book?
Blink was originally going to be a horror story that combined a few of my child hood fears and nightmares. I remember my childhood as this magical time where anything could happen and sometimes my brother, sister, and I would end up scaring ourselves, especially when we got together with our cousins (we loved to go ghost hunting). I had a lot of crazy dreams back then and one of the most memorable was a very vivid and frightening encounter with a man in a suit and top hat. When I finally saw his face, it was that of a cat. The first few drafts of Blink actually had him as the villain. His name was Raylan and he never talked in the story. The only thing anyone heard from him was the scream, which also had a more pronounced role in the original draft. Over time, the story just seemed to transform from a horror story into a more lighthearted fantasy and I eventually replaced Raylan with the more charismatic, Amaisia Moon.


Did you know you wanted to be an author when you were little?
Not really. I’ve always known that I wanted to be involved with something creative, but I went through a rock star and acting phase when I was younger before realizing I didn’t have anywhere near enough talent for either one. I started writing about five years ago after taking a creative writing course and it seems to be my artistic calling.


Chocolate or Peanut Butter?
Definitely chocolate, but they’re irresistible together.


The weirdest thing you've ever done?
I’m pretty reserved and usually don’t do anything too wild and crazy. I can’t think of anything too weird to mention, but I’m sure my friends would think of something.


Is there a soundtrack to the book/Favorite music?
For some reason, the song I hear when I think of Blink is Skyway by The Replacements, even though the lyrics don’t suit the story at all. I love bands like the Pixies, Social Distortion, and the hair-metal bands from the eighties such as Motley Crue and Ratt.


Do you need anything to write?
Sometimes I’ll have music playing, or if I get writer’s block, I’ll take a break and read something, but that’s about it.


How long do you write on any average day?
I usually write in spurts. Some days I’ll write for three or four hours and then not write again for a couple of weeks. I get distracted pretty easily, unfortunately, so I have a hard time getting on a roll. My average is probably about an hour, though.


Give us the number one reason to read your book.
I think it’s pretty unique and everyone that reads itsays it’s very imaginative.

A teenage boy wanders into a mystical forest ruled by a gypsy goddess named Amaisia Moon.   The forest changes with every blink or head turn and he discovers an ocean where dreams and nightmares literally come alive.

Up For Grabs: 3 PDF Copies of Blink-3 Winners