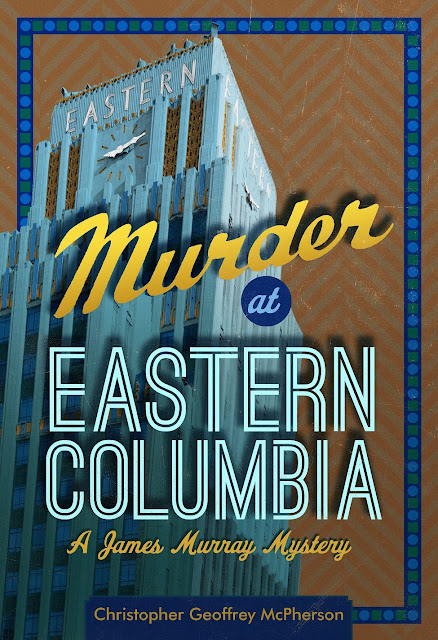 James Murray is a young man with a dream -- he wants to be a writer just like his idol, Dashiell Hammett -- but there's a Depression on, and he's the only one in his family with a job. Even though it's a good job -- clerking in the Junior Boy's department at the swankest new department store in downtown Los Angeles: Eastern Columbia, Broadway at Ninth -- it's not writing. At the end of one typical day at work, there's a scream. James rushes toward the sound and finds his best friend -- co-worker Elizabeth "Bess" Flowers -- apparently shot and lying dead in the Better Furniture department. He finds a note in her purse telling her to be in front of the Orpheum Theater at 5:30 "or else."
He looks at his watch: it's nearly that time now. Was she shot by a person she refused to meet? Or by someone who wanted to make sure she didn't make the meeting? James decides to keep the date in front of the theater where, with the help of his good friend, screen-star Charles "Buddy" Rogers, he begins a whirlwind ride through the crepuscular depths of downtown Los Angeles, trying to solve Elizabeth's murder. "Murder at Eastern Columbia" is not like any book you've ever read: Not a single novel, it's two parallel novels, featuring two heroes, working two murders in two different versions of 1930s Los Angeles.
Join James and his alter ego as they each try to solve the murder of the girl with sorrel-colored hair. His hard-boiled alter ego -- neither a private detective nor a police officer: just someone "who wants to help" -- needs to find out who's trying to pin the murder on him, but finds himself in a jam: "Yeh. Strawberry preserves. All the way up to my neck." Two men in two stories work their way through downtown Los Angeles following clews, interviewing people who might know something, going from location to location, with one goal in mind: find out who might have wanted the girl dead. Along the way they meet a rich cast of characters including the notorious gangster, a gorgeous raven-haired dame, the beautiful young boy whose love is his undoing, a young doctor whose specialty is cancer research, the cleaning lady with a secret addiction, the struggling piano player who just wants to keep his nose clean, the gum-popping pawn-shop clerk and the sultry Chinese apartment manager who tries to hide behind the mysteries of the Orient. "Murder at Eastern Columbia" is filled with twists, turns and a climactic scene along the dizzying heights of the observation deck atop the brand new Los Angeles City Hall. Come along for the ride in this James Murray mystery: the story of a young guy, a kid really, who dreams of something better.

"Both of us -- my sister and I -- wanted so bad to see Paris. Father sold one of our cars and managed to scrape up enough money to get us there and back, with a little left over for accommodations and food. It wasn't a lavish trip by any means, but we didn't care. We wanted to be in Paris more than anything else in the world, so Father sent us.

"We had a wonderful time. Met some wonderful people. One of them was a gorgeous French model. She took us under her wing. Showed us everything that made Paris so beautiful. We all became fast friends. She was supposed to be coming back to America on the same ship. Something happened at the very last minute -- I think she got a booking for a Vogue magazine cover shoot -- and she ended up having to take a later sailing. In the confusion, all of her bags were left on board our ship. There was no time to take them off, so she gave us the claim checks and asked us to make sure the bags arrived in America safely. She even gave us a couple hundred French francs for our trouble.

"Well, it was hardly any trouble, if you know what I mean. Think of it: two poor American girls, third class on a beautiful ocean liner, making the sailing across to America. My sister always had more ambition than I did. She took the extra francs the model had given us, marched right up to the purser and upgraded us both from third class to the finest first class suite we could afford. I was shocked, but it was all pretty exciting.

"She gave our room attendant the claim checks and had all the model's trunks brought to our suite. You should have seen her face when she opened them up: there were fabulously expensive Chanel dresses, Vionnets, Poirets, dresses by Molyneux and Lelong, entire suits by Schiaparelli and Mainbocher, and a separate leather bag filled with exquisite Hermes silk scarves. Hermes silk scarves! Can you imagine? It was all the best of the best of French couture right there in our suite. My sister spent hours trying on everything -- and then the idea hit her: she would have her hair and nails done at the ship salon and then go to dinner dressed in one of these sumptuous outfits! I was against it, of course, but she would hear none of it. So, she did just that and we went to dinner that evening.

"I have to admit, she looked stunning. She had chosen a fantastic dark-green satin Mainbocher, with an inset chevron in light green right at the waist. It came with an ermine-trimmed cape. Oh, with her red hair, it was amazing. She was perhaps the most beautiful woman at dinner that night. I didn't dare to wear one of the model's outfits, so I stuck to my own clothing, but I still looked good."

I looked up at her and smiled. "I'm sure you did," I offered.

She smiled back, then continued.

"When she came down the stairs into the main dining room, you could hear all the conversation stop as people turned to look at her. In fact, a few of the men stood and began applauding at her entrance. Soon, the entire room was applauding. I think they thought she was a famous actress or something, the attention she got.

"After dinner, there was dancing. She was the most popular woman on the ship that night. All the wealthy young roués fluttered around her like so many moths to a bright flame. She asked for a cigarette and was given ten. She asked for a light and was met with a blazing fire of lighters and matches. I was happy for her because she was happy. But then, he came up to her."

"Marco?" I asked, wiping my mouth and taking a sip of coffee.

"Yes. He approached her and the other fellows retreated fast. He had a reputation even aboard that ship. Once he made his claim on her, no other man dared to approach her. It was the start of a ship-board romance that lasted the rest of the trip. She had no shortage of fine outfits to wear and she wore them all. After that first night, I rarely spent time with her. How could I? She was always with him. I saw her across the crowded dining room, or on the deck, or at the symphony, but she was almost never without him at her side. I was worried, but she seemed so happy. It was the last time she was going to be that happy."

Christopher Mcpherson also has a contest going on via his Facebook page. One person will get an Amazon gift certificate, a celebrity photo, a box of note cards and an autographed paperback copy of the book.