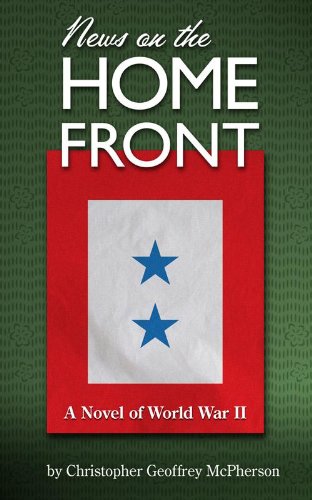 
I've spent a lot of my life writing -- daily newspapers, magazines, radio, a couple plays and a little television. "News on the Home Front" is my first novel. Since it came out, I have had another novel published -- "The Life Line" about a big earthquake that levels San Francisco.

Favorite reads?
I read an awful lot of biographies and histories and very little fiction. I guess real-life stories are so much more interesting to me than anything a writer can make up. As far as fiction goes, I'm a big fan of Ayn Rand's novels -- especially "Atlas Shrugged."


Inspirations for the book?
Aside from the fact that I have always had a soft spot for America between the wars (roughly 1918 through 1945) I have long been a fan of the "women's pictures" that Hollywood studios produced in the 1930s and 1940s -- like "Mildred Pierce" (with Joan Crawford), "Rebecca" (Joan Fontaine) and "The Great Lie" (Bette Davis). I thought it would be an interesting challenge to write a novel as if it had been one of those great melodramas.


Did you know you wanted to be an author when you were little?
I always knew I would be a writer, that's for sure. I was noodling around with words as far back as I can remember, creating animal stories and various adventures. I was very sick as a child so I had lots of time to myself to engage my imagination. It was probably one of the best things that could have ever happened to me.


Pet Peeves?
I try very hard to be tolerant of others and not judge them because they do something that I might find annoying. I always try to err on the side of assuming they are not annoying me on purpose. That said, I think my big pet peeve is when people act like they are proud of being uneducated. Knowledge is the most important commodity a person can have, and turning their backs on that is probably the biggest mistake people can make in their lives.


What's the weirdest thing you've ever done?
It's hard to pick just one, but a few years ago a local college was having a screening of the great Hollywood classic "Sunset Boulevard" about an aging movie queen and the screenwriter who becomes her gigolo. The movie begins with the screenwriter being found dead, face down in a swimming pool. So, I made up this model of a backyard complete with swimming pool and water and put a Ken doll in it face down. I put it outside the box office and cordoned off the area with real police "crime scene" tape. I thought it was the coolest thing.


Is there a soundtrack to the book?
Love big band, swing and jazz. As my book takes place in the 1940s, it would have to have a big band soundtrack.


Do you need anything to write?
I prefer quiet. The writing and editing processes are very involved for me. My mind is constantly working out character traits and plot points. If I have quiet, then I can rock. (And chocolate helps.)


How long do you write on any average day?
It varies a lot. I don't believe in forcing myself to write: if it comes, it comes; if not, I walk away. I have had writing marathons where the story just keeps coming and I type until my fingers get cramped. Usually, it's a couple hours a day.


Give us the number one reason to read your book.
I joke that the best thing about my novel is that there are no vampires or zombies in it. (No offense.) Vampires and zombies are all well and good, but we live in a world of people -- not vampires (probably). My story is about two young women who have been friends all their lives. They are trying really hard to cope with all the hardships and tragedy that war brings and it tests their friendship. In fact, their friendship actually comes apart in my novel, but (spoiler alert!) they do came back together and their friendship is even stronger. Anyone who has had a best friend will understand what they go through. Of course, a lot more happens in the story -- a lot of twists and turns that the reader won't expect.

Set against a worldwide canvas that includes New York, Paris and Germany "News on the Home Front" tells the story of two women who have been friends since their childhood in West Lake, Maryland. The world war has torn apart their lives leaving each trying to find a way to put it back together. It's been a difficult few years with rationing and shortages starting to take their toll. Carole's boyfriend, Philip, is off to fly for the Army; and Irene has taken a job at the nearby aircraft factory. Carole promised Philip that she would wait for his return from the war -- but circumstances begin to conspire against her. She's waited her whole life for him, but can she make it until the end of the war?

Email ThisBlogThis!Share to TwitterShare to FacebookShare to Pinterest
Labels: Giveaway, News on the home Front