My name is Dee Dee, I’m twenty five and I live in a beautiful part of Devon, England with my family. I have a younger sister, Amy who is a brilliant guitar player, some chickens, a cat (that adopted us when we moved in!!!) and some Koi.

Broken City is actually my second novel. My first, as my Aunt so delicately put it, was crazy but in my defence I was only sixteen at the time. On the plus side I learnt a lot (or so I hope) and two years later ‘Broken City’ was finished. Since then I have written another book ‘The Promise’, which is set in Saxon England it’s the beginning of a series and I am currently editing my third book which is set in the distant future and is also the start of a series. I’m about half way through and very excited about it!
I really hope you enjoy reading my books as much as I enjoy writing them. I also like to cook and wear impractical high heels!!! And as you might have noticed I have a horrible addiction to exclamation marks!!!

Favorite reads?
I basically love anything with romance and adventure: historical, futuristic, sci-fi or modern day….count me in!!!

Inspirations for the book?
Broken City started off as a dream I had and I couldn't stop thinking about it! The Promise was inspired by a lot of things but mostly by the song ‘two little boys’…I know that sounds mad but the friendship in that song got me thinking and is the basis for the friendship the foster brothers share.

Did you know you wanted to be an author when you were little?
Actually I wanted to be a Formula 1 racing driver! But writing kind of took over…

Any Pet Peeves?
Oooo so many!!!
Men in skinny jeans….seriously what is with that??? You want to challenge me to a who has the smallest hip/leg competition??? That is an excellent way to get ignored/dumped!!!
Mornings….who ever thought that would be an acceptable way to start the day!!!!
People who put savory and sweet on the same plate…eww!!!
People who chat away to you while they’re wearing sunglasses.

Chocolate or Peanut Butter?
Generally both together but if I have to choose one then chocolate!

The weirdest thing you've ever done?
Holding a huge snake…you’re probably thinking that’s not too weird but I hate snakes so I still don’t understand why I did it!

Is there a soundtrack to the book/Favorite music?
Yes there is! Gentian composed a piece of music for both books and you can hear it on their trailers here:
http://www.youtube.com/watch?v=gsFh7KI6i5U&feature=channel&list=UL

Do you need anything to write?
I can write anywhere and in any conditions but I often find it best to have my iPod on.
How long do you write on any average day?
I write when I have ideas, so it differs from day to day. Some days I don’t write anything and then others I’ll write 4000 words. My longest writing session was 8000 words!

Give us the number one reason to read your book.
Because I’m on my knees begging you to???

Deeta Richards has never seen the outside world. Before she was born a banking crisis brought civilization to an end and now no one leaves the safety of the compounds unless they need to, but Deeta still dreams of seeing more than the building she was born in.
Tom is in the guard, this group are the only people that the tribal elders allow to leave the compound and Tom knows only too well that Deeta could never survive the harshness that exists outside. Then tragedy strikes and Deeta and her Sister Jan find themselves captured by a hostile tribe. Why does Tom know so much about these people? And why do they know so much about him? As this mystery draws to a climax, they discover that their friend Tom is not quite what he seems..... 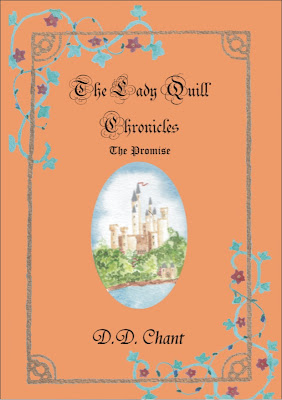 I wish to tell you a tale that began with a promise destined to change the lives of many.
When only a child, Lady Adele of Berron lost her family during a dreadful battle and was betrothed to a stranger.
Lord Rafe of Valrek, only a boy himself when the battle of Calis raged, grew to be a feared warrior and trusted advisor to his King. But sadness filled his past and Adele served only to remind him of all he had lost.
However the promise that bound these two together caused great anger to some.
What, Dear Reader, happened in those days of treachery and darkness? Incline your ear that I may whisper the secrets that you so desire to hear......