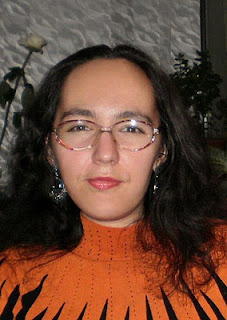 Ioana Visan has always dreamed about reaching the stars, but since she can't she writes about it. Her stories have been published in several Romanian anthologies and magazines. Her English debut came with the short story "Unhinged Reality" published by Every Day Fiction. "Human Instincts" is her first novella in English and she also has a story included in the upcoming "Evolution 2" anthology published by Evolved Publishing.

Favorite reads?
I like to read what I write or more like write what I read, it can go either way. Science fiction is my favorite genre. I'm not much into cyberpunk and steampunk, but everything else works for me. Fantasy comes close in second, though I read considerably less. Don't ask me for author names and book titles because there are too many to list them all.

Inspirations for the book?
The story was initially meant for an apocalyptic anthology, but I didn't want it to be something depressing. Therefore, I focused on an isolated case and not on the post-apocalyptic world itself. I also knew I wasn't interested in the technological part but more in the psychological concepts and issues. It worked so well that the story ended up longer than planned and, when the project fell apart, I decided to publish it as a novella.

Did you know you wanted to be an author when you were little?
It all started with daydreaming as a kid. Then for a long time I knew I wanted to write, but this was a plan for the distant future. When I turned 30, I decided it was time to happen NOW. And it did. :)

Any Pet Peeves?
The lack of manners and education and resistance to change that.

Chocolate or Peanut Butter?
Peanut butter? Eww! Give me chocolate every day for breakfast, lunch and dinner and I'll be happy.

The weirdest thing you've ever done?
Probably helping little brother come up with Halloween costumes. Yep, that would be it.

Is there a soundtrack to the book/Favorite music?
I used to listen to all the Muse albums on repeat while writing Human Instincts. I don't know if it reflects in the writing, but some people think it does. No need to say I haven't listened to Muse since. LOL

Do you need anything to write?
Not really, I'm really low maintenance when it comes to writing. Silence is always good or at least not being disturbed every other couple of minutes.

How long do you write on any average day?
The amount of time spent writing tends to vary, but when I'm not editing I usually write 1,000 words daily, except for the weekends.

Give us the number one reason to read your book.
It's a bit of a rollercoaster ride with plenty of twists and turns without forgetting what makes us all humans at the core. There's action, drama, loss, and also a bit of hope. And if you like strong, compassionate female characters then you're all set.

Dr. Deanna Nichols is a geneticist searching for a cure to save the world. After the war nearly destroyed it by releasing an aggressive virus, it was the vaccine that killed the humanity’s chances for progress and survival. Deanna feels guilty because she has participated in creating the vaccine, and General Mackenzie never lets her forget that.
Their luck changes when they are contacted by the convicts held in a secret military prison hidden in the arctic desert. The C deviance criminals are willing to negotiate and provide unaffected DNA samples in exchange for supplies and a visit paid by the doctor herself. Suddenly there’s hope, so Deanna embarks on a dangerous journey to a grittier reality than she had expected.
Could a woman alone save the world?