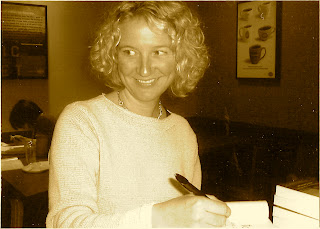 Jody Gehrman is the author of seven novels and numerous plays. Audrey's Guide to Witchcraft is her most recent Young Adult novel. Her other Young Adult novels include Babe in Boyland, Confessions of a Triple Shot Betty, and Triple Shot Bettys in Love, (Penguin's Dial Books). Babe in Boyland has recently been optioned by the Disney Channel and won the International Reading Association's Teen Choice Award. Her adult novels are Notes from the Backseat, Tart, and Summer in the Land of Skin (Red Dress Ink). Her plays have been produced in Ashland, New York, San Francisco, Chicago and L.A. She and her partner David Wolf won the New Generation Playwrights Award for their one-act, Jake Savage, Jungle P.I. She is a professor of English at Mendocino College.


Favorite reads?
Some of my favorites in the realm of “classics” include Nabokov, both of the Brontes (but especially Charlotte) and Jane Austen. Southern writers like Ellen Gilchrist made a big impression on me as a young writer. When I found Helen Fielding's Bridget Jones Diary, Nick Hornby's High Fidelity and Sophie Kinsella's Shopaholic series I became fascinated with British comic geniuses. I read a lot of YA these days and some of my favorite writers are Beth Fantaskey, Nina LaCour, Maggie Stiefvater and Stacey Jay.

Inspirations for the book?
I'm interested in witchcraft. I guess I'm sort of a pagan at heart and have always connected nature with spirituality, which is a fairly central idea in the book.

Did you know you wanted to be an author when you were little?
Yes, pretty much. When I was eight I learned to use a typewriter and wrote my first "novel." It was actually a super long letter sent to my best friend about us riding around on our flying dogs. We'd moved to Canada for the year and I missed our imaginary games, so I wrote about them instead. I guess writing for me has always been about delving into imaginary worlds. I still tend to think of each of my novels as long love letters—to a place, a time in my life, a person, a feeling.

Any Pet Peeves?
Ads with misused or missing apostrophes.

Chocolate or Peanut Butter?
Both!

The weirdest thing you've ever done?
Went to Roswell, New Mexico with my father to interview a bunch of UFOlogists.

Is there a soundtrack to the book/Favorite music?
Spooky Little Girl Like You by The Zombies.

Do you need anything to write?
Caffeine and nature sounds on my iPod.

How long do you write on any average day?
Varies, but I try to get at least three hours in.

Give us the number one reason to read your book.
Because it has magic chocolate cake, necromancers and cute boys in it. I guess that's sort of three reasons--oops!

Falling in Love, baking a magical cake, fighting an evil necromancer—it’s all in a day’s work for Audrey Oliver, seventeen-year-old witch-in-training. When her mother goes missing and her twenty-one-year-old witchy cousin shows up out of the blue, Audrey knows something’s gone horribly, dangerously wrong. Now it’s up to her to get her own magical powers up to speed before everyone she loves is destroyed by the sorcerer intricately connected to her mother’s secret past.