I grew up in a small town called Dooms, VA. I typically don't post pictures of myself. Instead, I usually use a picture of a mountain range in South Dakota, at twilight, when the sky's turning colors and the moon is just starting to glow.

Favorite reads?
Watchers by Dean R. Koontz and The Stand by Stephen King

Inspirations for the book?
My writing process is a little strange. I usually get an image in my head and I build the book around it. For this, my young son put on a sentimental necklace and the story grew from there.

Did you know you wanted to be an author when you were little?
Ever since I learned to put words together, I wanted to be a writer.

Pet Peeves?
I'm fairly easy-going. But I hate the sound of nails on chalkboard.

Chocolate or Peanut Butter?
Both, preferably with ice cream

The weirdest thing you've ever done?
Can't actually write that one, but it involved a mailbox, a college friend, and the police. Theft wasn't involved and neither was vandalism.

Is there a soundtrack to the book/Favorite music?
Cruxshadows for the beginning and Muse for the end.

Do you need anything to write?
Music. When I zone out and can no longer hear the music, I know I've gotten into the story.

How long do you write on any average day?
Several hours.

Give us the number one reason to read your book.
It's different and it's about being different. 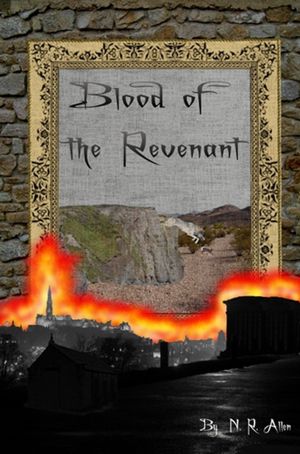 Something strange is happening in Returning City, something dangerous.
Gabriel has never questioned things before. He knows that because he is a revenant like everyone else, he has to fight the not-family and hurt them to keep his own family safe. He has never questioned that the sky is always dark or that hungry things watch him from the forest.
But in Returning City, everyone has secrets.
Gabriel grew up believing that he was the same as everyone else. But now, things are changing. He begins to see strange, monstrous creatures instead of the people he has always known. Struggling to protect his family, Gabriel must turn to a mysterious stranger, but is she only helping him for her own dark purposes?
In order to survive, Gabriel has to become more than he has ever been, and he will have to go against all he has ever known. Soon Gabriel will realize that something dangerous waits for him—his past—and that past holds a secret deadlier than anything he could ever imagine.

Email ThisBlogThis!Share to TwitterShare to FacebookShare to Pinterest
Labels: Giveaway, Interview, N. R. Allen, The Blood of the Revenant