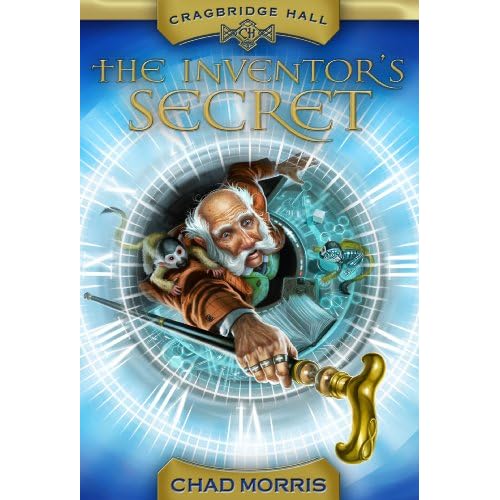 Synopsis:
Abby and Derick have been accepted to the most prestigious secondary school in the world -- Cragbridge Hall. Due to the inventions of their grandfather, Oscar Cragbridge, they will be able to experience history in 3D, use their minds to literally project visual interpretations of classic literature, and become animal avatars for zoology.
But when their grandfather and parents go missing, Abby and Derick must follow clues Oscar left for them that will reveal a dangerous secret. Along the way, they discover there is much more to one of their grandfather's inventions that anyone has ever dreamed. Saving their family will take all of Derick's mind and Abby's heart as thy come face to face with a crazed scientist who desperately seeks to change the past. If they fail, the world - past and future - will never be the same.
This book is a page-turning, time-travel adventure that teaches powerful lessons about choice and consequence, believing you can do hard things, and valuing your history.


Generally speaking, I'm not a big fan of middle grade. I grew out of the stuff long before I hit my teenage years, and have only revisited it for real gems. But, to put it bluntly, I found the Inventor's Secret to be one of these gems.
Chad Morris' characters were remarkably believable and relateable. I've found a big thing that puts me off about middle grade is that the plot, the world, and the adult characters are all painted in a simplified middle gradish way. But in the Inventor's Secret, the adults weren't simplified. They actually acted like adults. Of course the kids still saved the day, but the adults weren't weak or stupid. And, even better, the kids weren't whiny or stupid themselves. Many times, middle grade author's try to emphasis something by emphasizing their characters' reactions to it (The monster is scary because the kids act really scared of it, not because it actually is scary). I'm happy to say, there was none of that in here. In fact, it may have been one of the main character's normalness that really drew me to this book. Abby (Derick's twin and the main focus of the book) is average. She wasn't a genius like her brother, or all the other kids at her school, and she could never think of witty things to say. But she still was a hero, simply because she was willing to work for what she wanted. And even though her brother Derick was a genius, he was lovable too. Originally I thought Carol (Abby's friend) would get annoying, but she didn't. And her same irritating traits added a nice flavor to the characters' interactions.
Characters: 5 Stars
This was not high fantasy, but it was still a fun journey and kept me reading till the end. I appreciated that the world and the plot didn't revolve around the children. Without them, the world would have been destroyed, but they didn't discover some secret power at the last moment or another VooDoo, easy way out. Every victory was won by them as they were. And time travel. I mean come on, what doesn't grab you about that? At first, the plot may sound unoriginal, but Chad Morris succesfully freshens it up.
Plot: 4.5 Stars
Chad Morris has written a fun story with an aspect about it that makes the adventure genuine entertainment. The action/reaction time throughout the book flowed smoothly, and the end tied up satisfactorily while still leading nicely to a sequel. Quite thankfully, Chad Morris lacks the patronizing tone that so many middle grade authors present to their audience. To sum up, I found it an engaging book and, even though much older that middle grade, was able to enjoy it thoroughly.
Style: 4 Stars