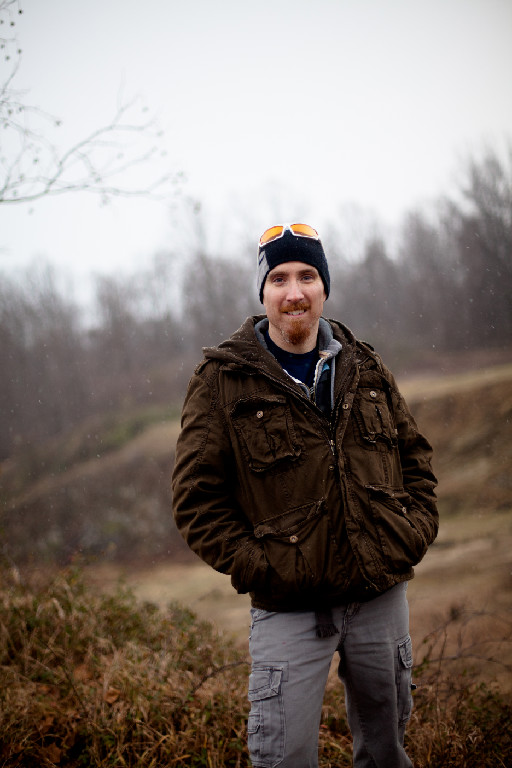 I was born in West Chester, Pennsylvania during a blizzard. The snow made travel by car impossible, so my father called an ambulance when my mother went into labor. The ambulance became stuck at the bottom of their home’s driveway, prompting the dispatch of a fire truck, which towed the ambulance to the hospital where I was born.
I first started writing at 10 years old with my sequel to “Return of The Jedi” – as a self-proclaimed “Star Wars geek” I had lofty aspirations of working with George Lucas on filming the project. In 1990 I began filming his version of “The Lord of The Rings” in my parent’s basement, but the plug was pulled after I nearly burned down the house.

Favorite reads?
I'm currently obsessed with anything Cormac McCarthy. Also currently reading World War Z.
Inspirations for the book?
Tristis Manor was inspired by my love for her character in Exiled. I really identified with her -her humanity, her ability to get up and take action despite being emotionally torn apart.  I wanted to delve into her past and give my readers something to hold them over until book 2 of The Never Chronicles releases.
Did you know you wanted to be an author when you were little?
I knew I wanted to do something creative when I was little. If you asked me at the time I would have told you I wanted to direct films.  Part of filming anything was writing the screenplay, which I did often.  I believe I planted the writing seed at this point.
Any Pet Peeves?
In writing: Seeing the same word unnecessarily used in the same sentence. In life: the little rectangular distraction devices called mobile phones.  Yes, they have their advantages but I fear they are having a negative impact on our (humanity) ability to focus on what's going on around us.  I love taking mobile phone vacations!
-Chocolate or Peanut Butter?
Peanut Butter! -never been a big fan of chocolate.
The weirdest thing you've ever done?
I did a multi-sport adventure race that ran for nearly three days non-stop.  The second time darkness fell I started seeing things (as did my teammates) due to extreme fatigue.
Is there a soundtrack to the book/Favorite music?
I happen to enjoy listening to movie soundtracks while writing.  If I had to pick something for Tristis Manor, I'd choose something dark yet with a sense of hope.  Michael Giacchino (composer for Lost and Star Trek -the new ones, the TV show Fringe, Alkatraz, Super 8) he's got a great ability to find darkness in a score as well as finding beautiful sequences to complement the dark.  A very talented man for sure!
Do you need anything to write?
Quiet -found in the form of noise canceling headphones. Tea -usually earl grey. A snack -usually Keebler Sandies (aside from those, I am a healthy eater...I swear!)
How long do you write on any average day?
Not nearly as long as I'd like...I get up at 4: 30 and write until about 6:30...or until my daughter comes in and asks for breakfast.
Give us the number one reason to read your book.
I believe you will immediately be immersed into the mind of the main character, Margaret.  She takes you places most people never dare to go and also shows her ability to persevere despite the terrible things happening to her.  A great character is hard to resist.

Author Note:
I had originally planned to offer Tristis Manor for free but when I discovered RAINN, I realized that being able to help others who may have experienced similar atrocities as Margaret, the main character in Tristis Manor was just too important.
So please remember that ALL proceeds for the next 4 months (until July 20th) go to RAINN, a truly wonderful charity.
100% of the proceeds of this book will benefit the Rape, Abuse and Incest National Network (RAINN). RAINN is the nation's largest anti-sexual violence organization and was named one of "America's 100 Best Charities" by Worth magazine. RAINN created and operates the National Sexual Assault Hotline (800.656.HOPE and online.rainn.org) in partnership with more than 1,100 local rape crisis centers across the country and operates the DoD Safe Helpline for the Department of Defense. RAINN also carries out programs to prevent sexual violence, help victims and ensure that rapists are brought to justice. To learn more about RAINN, visit rainn.org.
J. R. Wagner, author
~ In the book world, word of mouth is king. ~

Margaret lives in a constant state of fear. Fear of her mother, whose deep seeded anger and unwillingness to speak of Margaret's past have long since pushed Margaret away. Fear of disappointing her father should he ever discover the events of that day. Most of all, Margaret lives in fear of her abuser's return. Margaret turns to self-harm to cope with her pain and fear. Only when her self-inflicted injuries bring her near death does she realize she has the power and the support from an unlikely place to stand up to her fears and believe in herself again. Tristis Manor is a novella from The Never Chronicles, an epic fantasy series. Tristis Manor is a tale of perseverance, strength and redemption.