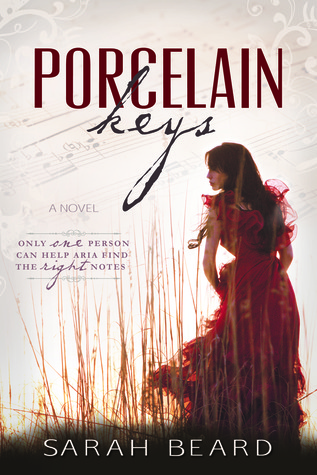 Porcelain Keys is an upcoming YA contemporary romance from author Sarah Beard.

Synopsis:
Aria's life is full of secrets--secrets about her mother s death, her father s abuse, and her dream to go to Juilliard. When Aria meets Thomas, he draws out her secrets, captures her heart, and gives her the courage to defy her father. But when tragedy strikes and Thomas disappears, Aria is left alone to transform her broken heart s melody into something beautiful. Porcelain Keys is a captivating love story that will resonate long after the last page is turned.

I must say, though they aren't present in the synopsis, Vivian (Aria's neighbor, and rather eccentric, but determined friend) and Nathaniel (Aria's piano teacher) were my favorite characters. Vivian was a fun, hardy, and confident woman. Nathaniel had struggles and triumphs, but realized that he was responsible for shaping his life. And though not present for most of the novel, they added glimpses of a rounded world in which the novel took place. However, I'm afraid Aria (main character) didn't really do it for me.She was very dedicated to her music, and I could clearly see the love she had for it, but she had a lot of emotional insecurities -- stemming from her father's abuse, loosing her mother, and other tragedies that wouldn't let her move forward. I felt like she was stuck and didn't really progress in the book. There were times when she released her problems through her music and almost moved on, but she was back where she started after the music ended. It felt like she didn't know who she was without Thomas (Romantic interest #1) reassuring her of her value. I was disappointed she never grew into the strong young woman her friends wanted her to be. That being said, I did appreciate Thomas as being a kind, caring, hard-working, respectful love interest who gave a foundation to the romance other than hormones.
Characters: 2.8 Stars

It was quite relaxing to read a romance, after the thrillers and adventure stories I've had lately. The plot was easy-going and had some very cute moments between Thomas and Aria as their romance blossomed. Though some of the plot twists felt contrived, the majority didn't and served to keep things flowing. I really enjoyed Aria's musical journey through practicing, lessons, and eventually Julliard. It added an interesting and intricate side to the book that came across as beautiful and artistic. I also enjoyed Aria's travels and the way Thomas looked out for her.
Plot: 3 Stars

I loved the theme of music in the story that Sarah Beard skillfully wove in. It gave Aria a connection with her mother, strong enough that, even though her mother passed away before the first chapter, Aria's background gained authenticity. It was a sweet and subtle touch that paired perfectly with a refreshingly clean romance.
Style: 3.5 Stars

Subnote: And the cover? Holy Gorgeous!
Posted by Valette M. at 12:00 AM