Review: In The Shadows by Kiersten White & Jim Di Bartolo 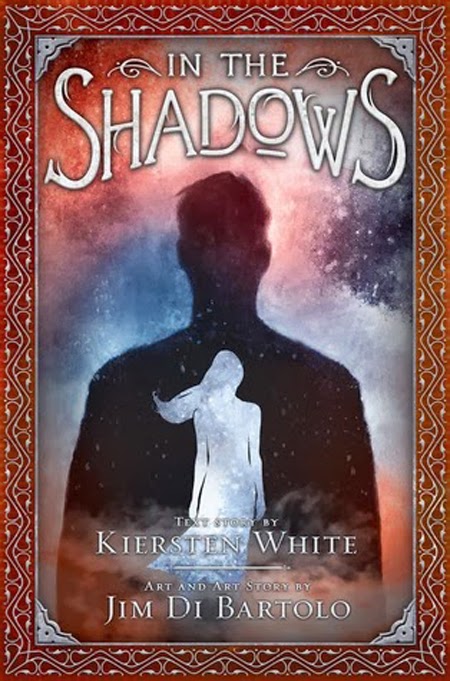 Cora and Minnie are sisters living in a small, stifling town where strange and mysterious things occur. Their mother runs the local boarding house. Their father is gone. The woman up the hill may or may not be a witch.


Thomas and Charles are brothers who’ve been exiled to the boarding house so Thomas can tame his ways and Charles can fight an illness that is killing him with increasing speed. Their family history is one of sorrow and guilt. They think they can escape from it . . . but they can’t.


Arthur is also new to the boarding house. His fate is tied to that of Cora, Minnie, Thomas, and Charles. He knows what darkness circles them, but can’t say why, and doesn’t even know if they can be saved.


Sinister forces are working in the shadows, manipulating fates and crafting conspiracies. The closer Cora, Minnie, Arthur, Thomas, and Charles get to the truth, the closer they get to harm. But the threat is much bigger than they can see. It is strangling the world.

Until one of the boys decides he wants to save it.

I've enjoyed all of Kiersten White's work, and though I'm not as familiar with Jim Di Bartolo, I believe I can say they showed their finest through In the Shadows.
The character work was masterful, particularly in the art portion of the book. Bartolo painted with such deft detail and powerful emotion that, to be cliche, the characters seemed to walk off the page. Both the text and the art story matched up seamlessly in their character portrayal with incredibly gorgeous hues and descriptions.
Characters: 5 Stars

I'm not a fan of graphic novels, and, thankfully, this was not a graphic novel. The art has such class that each painting could feasibly stand on its own, with anguish, hope, happiness, and all the other tales of human life displayed in such striking scenes. Trust me, no interest is lost for the fact that the action is painted. I was equally pleased with the written story and found it to be heavy in intrigue, friendship, romance, and the supernatural. It is very emotional and well matched with the intensity of the art story.  And the beginning of the book, the text and art story seem to be generally unrelated. As things lead towards the finale, however, both tales spiral tighter and closer until they collide with a heart wrenching bang. No matter what twists you expect, this is a book that will demand to be reread from a different perspective as soon as it's finished.
Plot: 5 Stars

I could go on and on about the style. The art in combination with the text was an entirely new experience and was quite exhilarating. This unique story of love and loss and struggle all brilliantly portrayed by two talented creators was beautiful. I will absolutely be researching more of Jim Di Bartolo's work and continuing to keep an eye out for Kiersten White's future books.
Style: 5 Stars