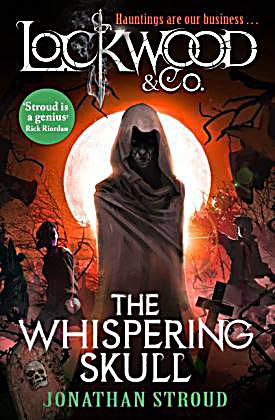 In the six months since Anthony, Lucy, and George survived a night in the most haunted house in England, Lockwood & Co. hasn't made much progress. Quill Kipps and his team of Fittes agents keep swooping in on Lockwood's investigations. Finally, in a fit of anger, Anthony challenges his rival to a contest: the next time the two agencies compete on a job, the losing side will have to admit defeat in the Times newspaper.

Things look up when a new client, Mr. Saunders, hires Lockwood & Co. to be present at the excavation of Edmund Bickerstaff, a Victorian doctor who reportedly tried to communicate with the dead. Saunders needs the coffin sealed with silver to prevent any supernatural trouble. All goes well-until George's curiosity attracts a horrible phantom.

Back home at Portland Row, Lockwood accuses George of making too many careless mistakes. Lucy is distracted by urgent whispers coming from the skull in the ghost jar. Then the team is summoned to DEPRAC headquarters. Kipps is there too, much to Lockwood's annoyance. Bickerstaff's coffin was raided and a strange glass object buried with the corpse has vanished. Inspector Barnes believes the relic to be highly dangerous, and he wants it found.

The author of the blockbuster Bartimaeus series delivers another amusing, chilling, and ingeniously plotted entry in the critically acclaimed Lockwood & Co. series.


A snappy sequel to The Screaming Staircase, featuring our favorite crew of tough, yet refined, psychic agents who continue with enough zest to balance out the darker aspects of the story. Lucy, determined and utterly loyal to her ghost-hunting agency, is blissfully free of the pitt-falls action-inclined females typically trip over. And she works so smoothly with George and Lockwood it's an equal pleasure to see them fighting a ghost or drinking cocoa in their kitchen. We see their metals tested, literally, and watch their dynamic trio evolve. No stale characters here, just heroes with enough flair to survive a world like theirs.
Characters: 5 Stars

After the climax of The Screaming Staircase, I was interested to see what the Whispering Skull had in mind: it's hard to top what happened there. After all, I thought, there's only so much you can do with ghosts before they lose their chill. I was wrong. This is a ghostish story set not to paralyze the reader but to send a pleasant shiver up the spine. And it certainly does, with the haunting of a vicious new specter set against the backdrop of an abandoned sanitarium. Don't read this book in the dark, and the grisly ghosts we meet ensure it's a bad choice while eating too. Mr. Stroud has excellently plotted an entirely new adventure with plenty of ghosts, enough sword-play and perfectly human villains to run your nails raw, and just enough glimpse of the great underlying mystery that ties the series together to set your teeth on edge.
Plot: 5 Stars

Set in an alternate history, Stroud's world rings disturbingly true to our own. The Problem (ghosts only started appearing 50 years ago) and its affects on society are so masterfully incorporated into the story the fact that restless spirits do appear feels completely natural. Looking for a series with depth to snag your interest? Well this is it! In short, this book was no less enjoyable than the first, and I can safely say Lockwood & Co. has earned it's place next to Stroud's also wonderful series, The Bartimeaus Trilogy.
Style: 5 Stars

Check out my review of Lockwood & Co. -- The Screaming Staircase  and be sure to catch the sample on Amazon!