Dan O'Brien is a writer and screenwriter. He currently attends a California university and is pursuing a graduate degree in Psychology. He has written over 10 novels, several screenplays and is working on a graphic novel. A philosopher and martial artist, his days are filled with writing and training.

Favorite reads?
That is a pretty long list. I have been reading Geroge R. R. Martin's fantasy series A Song of Fire and Ice lately. My all-time favorite novel is Les Miserables by Victor Hugo. Douglas Adams and Issac Asimov wrote some books that would definitely be included in a favorite read list. The Thief of Always by Clive Bark is great too. The Dark Tower series is pretty incredible. Lonesome Dove ranks high on that list as well. There are really too many to count, across too many genres.

Inspirations for the book?
Inspirations for writing generally come from crazy, random happenstance of life. I will often have strange dreams that become novels, and sometimes it is as mundane as having an idea in line at the grocery store. The novels that are out now were all the product of interesting dreams I had intersecting with the randomness of life.

Did you know you wanted to be an author when you were little?
I did know I wanted to be writer, or more accurately, that I wanted to be a storyteller. I was fond of creating intricate plays, rife with story and little characters mounted on Popsicle sticks.

We're about to be catapulted into a rush from one holiday to the next. Which is your favorite?
I would say New Years, simply because I don't particularly like the rush and traffic of Christmas or the food coma of Thanksgiving. I like the idea of friends and family getting together with the hope and promise of better times.

Is there a soundtrack to the book/Favorite music?
I listen to a lot of James Newton Howard and Hans Zimmer when I write. Recently, Mumford and Sons have found a place on my playlist. I saw them in Mountain View at the Bridge Benefit Concert and they were incredible.

Do you need anything to write?
My plaid sleepy pants. They get me in the right frame of mind to write.

How long do you write on any average day?
I try to think about specific writing goals, as opposed to time and duration metrics. I will finish a chapter or an outline; ideas and foals like those are how I normally measure my writing. If pressed, I would say I write at least an hour or two a day on average.

Give us the number one reason to read your book.
My books have believable characters who you will want to journey with until the end.

Dan O'Brien is graciously giving away one ebook  copy of his exciting book, Cerulean Dreams! 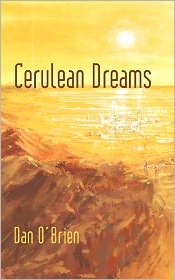 Orion, the last city of men. Deep within the desert, a secret lay waiting. Young women found dead in the street. A corporation that controls the sleep of a populace that never sees the light of day. Alexander Marlowe seeks to unravel the mysteries of Orion as he helps a young girl, Dana, flee the city. The closer they come to the truth, the greater the danger that hunts them. Follow them as they search beyond the boundaries of everything they have ever known for answers.