A warm welcome to author Kevin M. Turner!
Kevin Turner is the author of the recently released The Magi, the first book in a children's fantasy series.
The Magi is Kevin's first Novel, but he has been writing since he could hold a pen. He is in the middle of the next installment of The Magi Series. Kevin is a middle school English teacher and a professor of philosophy and education. He currently lives in California with his wife and daughter and two dogs.
See my review of The Magi here. Definitely worth reading. :)

-Tell us some of your favorite reads.
Children’s – Harry Potter, The Hunger Games, The Hobbit, The Outsiders, Hatchet, The Adventures of Tom Sawyer
Others – L.A. Requiem, Angels and Demons, Chasing Darkness
-Inspirations for The Magi?
I teach middle school English. One of the most daunting tasks I have is trying to help a student find
a book in the school library that meets their particular interests and needs. After years of becoming
frustrated with many students not finding books they wanted to read, I decided to ask them point blank what their idea of a perfect story would be. I gave them a survey and had them fill out simple questions like what they liked to read and what made those stories enjoyable. Eventually, after going through survey after survey, some consistencies began to develop, and I took them to heart. I thought, “Maybe I could write this.”
And that was the beginning inspiration of The Magi. The creation is mine, but I tried to meet the literary requests of my students at the time.
-Did you know you wanted to be an author when you were little?
No. When I was younger, I was sure I was going to be a doctor. Then I took a college biology course and my future in medicine quickly came to a halt. And the world is grateful.
-We're about to be catapulted into a rush from one holiday to the next. Which is your favorite?
Definitely Christmas! The world is transformed at Christmastime into a magical, feel-good place where
life is simple and spending time with loved ones is encouraged. It seems that there is a timelessness
about Christmas that doesn’t happen at any other time of the year.
-Does there happen to be a soundtrack to the book / Favorite music?
I have a very eclectic taste in music. I can enjoy classical music at one moment and enjoy heavy metal
the next. If my book had a soundtrack, however, I would want John Williams to write it.
-Do you need anything to write? (ex. chocolate, music, slippers) :)
Absolute quiet. I’m not one to do well with distractions. I also find it easier to write in gloomy   weather. That sometimes becomes difficult living in California. I may soon have to add tea to this list.     That or at least some hot beverage.
-How long do you write on any average day?
I’m afraid I don’t write every day. There are some days that I write for hours and then others that don’t write at all. Lots also depends on what’s happening at work. I don’t yet write for a living, so I                     have to really find time to stay on top of things.
-Give us the number one reason to read The Magi.
It’s fun. I wrote it with middle school kids’ interests in mind, wanting to give the kids who don’t like reading something entertaining to read.


Thanks for the interview! 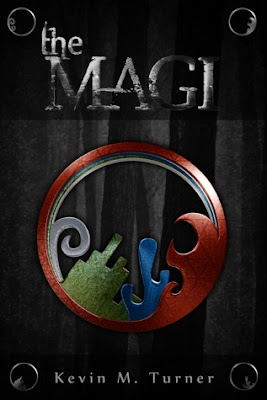 Thirteen-year-old Elijah Hawk has never heard of the Magi. He knows nothing about their three thousand-year-old secret. He has never been to Savenridge, the Magi city hidden deep inside the northern woods. Most of all, Elijah is unaware of the dangers hunting him. After one terrifying night, however, all of that changes! On a quest to solve the horrific murder of his parents, Elijah stumbles upon the land of the Magi. Learning their ancient secrets and training with their power is the least of his problems. In order to find out why his parents were killed, Elijah learns that he must confront the dangers that are hunting him, even though it means almost certain death. What's more terrifying is discovering that his journey to this new world may not have been an accident after all.
Posted by Valette M. at 4:59 PM