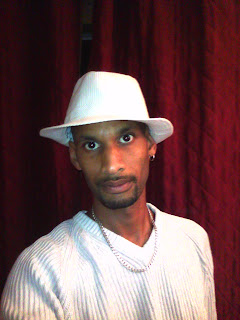 I am a 35 year old writer living in South Florida. I was born and raised in Brooklyn, N.Y. and lived in NYC until I was 29. I was a cop briefly, and then gravitated to private security consulting.

I’m big into most sports (I won’t offend the fans of the sports I hate, but it rhymes with snoccer… lol).
I am a Christian, and while I do not write about my faith, it definitely affects how and what I write about.

Favorite reads?
Hmmm. I am a huge Terry Goodkind fan. His Sword of Truth series is pretty great reading. I’m 8 novels in with about 3 to go. It’s a nice mix of adult fantasy with thriller thrown in there. It’s got an interesting heaven vs hell / good vs evil tone running through it. Think Lord of the Rings but way more graphic in terms of sex and violence.
I am also a big fan of Shakespeare. I took a couple Lit classes in college where the main focus was his work. I also wrote a short appropriation of King Lear, The Tempest & Macbeth combined. Once you get passed the Olde English, he is a great read.

And of course The Bible!

-Inspirations for the book?
The honest and true inspiration for this novel is my big sister. That’s the short-answer. The long-form version is; I had one of my “crazy dreams” in which my sister and I were government agents working on a secret project in outer space. In part 1 of the dream, all was well. Fast forward to second part of dream where she was missing and in danger. I had to try and convince people that not only was she not just a random figment of my imagination, but that she was also in harm’s way.
Once I woke up, covered in sweat and a bit traumatized, I grabbed a pencil and pad and started writing. After an hour I had a bare-bones outline. Next day I grabbed my laptop and the rest is her-story.

-Did you know you wanted to be an author when you were little?
When I was younger, I had many dreams and goals and hopes and wishes. I fantasized a lot of being a member of GI Joe or some other action-packed super hero type organization. In some respects that may have been the spark for me eventually getting into law-enforcement later on.
I also wanted to teach literature after having some great English teachers coming up in school.
My drive to write started midway through High School when I began reading Emily Dickinson and Edgar Allen Poe. Both authors/poets definitely got me interested in putting pen-to-paper early on.

-Pet Peeves?
I’m pretty agreeable in most settings, but I do have a few. Do not like messy people (though I have my moments of laziness – Just hate seeing others be slobs).
People who eat with their hands and then don’t wash them. Just keep your grimy, saliva covered fingers away from me!
Do not enjoy people who are certain that their opinion is certifiably correct and all others are flat-out wrong. It’s very arrogant and obnoxious and only serves to validate their ignorance when someone acts like that.
Oh, bad handshakes! Like seriously, do you have the tensile strength of a new-born? Even women have some amount of testosterone. Use it to grab my hand firmly and shake!

-Chocolate or Peanut Butter?
Probably gonna’ lose some readers with this one, but, Neither. I’m a strawberry kind of guy. Sorry!

-Is there a soundtrack to the book/Favorite music?
Um, I would say I definitely tried to imagine what music would go with the film version (should there ever be one made). Didn’t come up with anything firm yet, but I have some ideas.
Listened to lots of stuff while writing: Blink 182; Seal; Dave Matthews; Lily Allen; Notorious B.I.G.; Jay-Z; +44; Drake; EBT; John Mayer; Pink; James Taylor; Counting Crows; Corinne Bailey Rae; Pearl Jam; A Tribe Called Quest; 2-Pac; Rihanna and just about anything else that  got me focused for that hour, day or session.

-Do you need anything to write? (ex. chocolate, music, slippers) :)
Sure, when I’m really gonna’ hit it hard, I like to have some tea handy, headphones plugged in, couple of oatmeal raisin or coconut cookies, and darkness (definitely hate bright lights in my eyes while writing. Messes up my “zone”).

-How long do you write on any average day?
Right now my writing consists of blogging and writing press releases and emails. While I was writing my novel I would probably go at it for 10-15 hours straight with only a couple bathroom, snack, or smoke breaks. The rest of the time I was locked-in so to speak.

-Give us the number one reason to read your book.
It’s a nice combination of action and suspense. It brings you along at one speed, then WHAM! Slams you back against your chair and ratchets the mood up several notches. Then back and forth, keeping you on edge the whole time. It also leaves you with just the right amount of questions where you understand the novel as a stand-alone but also crave the answers that await you in the sequel.

Government agent Derrick Thomas awakes from a disturbing dream to find a message from his father asking for help. As he sets out to lend his assistance he quickly discovers that not only has his father gone missing, but that a clandestine government agency is out to derail his search before it can begin. After the murders of two of his father’s colleagues and the further disappearances of his mother and sister, Derrick is thrust into a battle for the lives of his family while attempting to uncover details of a secret government program which may hold the key to his family's whereabouts. Will he be able to save them and uncover the truth before he becomes the next victim of a government bent on keeping him silent?

Ahmad Taylor has generously offered to give away three ebook copies of his Dark Side of the Moon on this blog!
*Giveaway*
Ends 2/27
Mandatory:
You must be a follower of this blog
Optional:
Follow Ahmad Taylor on Twitter (+1)
Friend Ahmad Taylor on Facebook (+1)

Email ThisBlogThis!Share to TwitterShare to FacebookShare to Pinterest
Labels: Ahmad Taylor, Author Interview, Giveaway, The Dark Side of the Moon