A big welcome to author James West, who is stopping by my blog as part of the tour for his new epic fantasy book The God King! 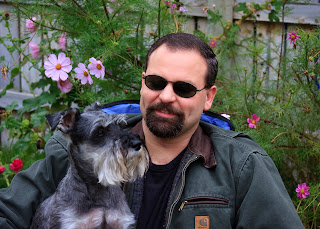 When James A. West was thirteen years old he read The Talisman, by Stephen King and Peter
Straub, and a seed of an idea was planted that someday he, too, wanted to create different worlds and realities. After many years and occupations—including a stint in the US Army, a year as a long-haul truck driver, and a log home builder—he enrolled at the University of Montana, Missoula. There, he majored in Psychology and, by chance, took a creative writing course that allowed him to revisit the idea of creating different worlds and realities . After college, he started a small woodworking business with the express purpose of using it to fund his writing journey. James lives in Montana with his wife and his bodyguard—a Mini-Schnauzer named Jonesy.


Favorite reads?
I started reading what most would consider adult fiction by the time I was 8 or 9 years old. I’d
pick up Louis L’Amour, Tom Clancy, any number of romance books, and whatever else was
around the house. When I was 13, my aunt introduced me to the Talisman, by Stephen King and
Peter Straub, and that book changed my life. I had always liked the fantastical in movies, but up
until then I had never read anything like the Talisman. In a very real sense, that novel opened a
door for me to explore not just the real world, but completely different worlds born from dreams,
desires, or even fears. I still read just about anything, but I always come back to the fantastical.

Inspirations for the book?
When I started this project I was looking into the dark ages. I discovered that such times are
dark in the sense that there is little known about them, because when a dark age falls due to one
calamity or another, survival becomes key—when you need food and shelter, there is little time
or effort spent chronicling day to day experiences. At any rate, I wanted to set a fantasy world
into one such dark age, and see what would happen.
In The God King, the end of the world starts unfolding from the outset when a power never
meant for mortal hands is unleashed upon the world of men. I wrote The God King as a stand-
alone novel, but with an option to renew in the sense that there is one small yet crucial element
left unfulfilled. Essentially The God King is the prologue/prequel of my coming series, Heirs
of the Fallen. My intention is to let the effects of this unleashed power, coupled with human
motivations and the need to survive another day, flavor everything else that I write in this world.

Did you know you wanted to be an author when you were little?
No, not at all. While the seeds of creating worlds fell into my head when I was young, they
lay dormant for a long time. I was raised with the idea that a career meant giving your life to
something you probably hated, but would pay the bills and build a nest egg. It was not until I
discharged from the US Army, went to college, and took my first creative writing class that I
started to consider the possibility of becoming a professional storyteller. My greatest hope is that
I can eventually pay my bills and build a nest egg with writing—something I love, rather than
despise.

Any Pet Peeves?
I don’t know if it is just me, but nine times out of ten it seems that when people describe their
pet peeves, I am usually left with my mouth hanging open, because they are the worst for doing
exactly what supposedly bothers them. That being said, I absolutely hate it when people take
their dogs on walks with the sole purpose of letting their pet potty on a neighbor’s lawn. I have
two or three of those types in my neighborhood. I tolerate them because, well, their pets seem to
so thoroughly enjoy fouling up my yard. When I walk my dog, I carry a poo bag … but I have to
admit, I have been carrying that same, unused bag for about seven years now :)

Chocolate or Peanut Butter?
I am a big fan of peanut butter. Sometimes chocolate gets thrown in, sometimes not, but peanut
butter works anytime, anywhere. Chips and salsa, though, is where it’s at!

Is there a soundtrack to the book/Favorite music?
I was born in 1972 and became a teen in the mid-80s. Somewhere in that time I transitioned from
top 40 stuff to Van Halen. About that same time, the whole Tipper Gore/PMRC thing heated
up (if anyone reading this does not know what that was, it is the reason we have warning labels
on music). Heavy Metal became the main culprit in everything from Satanism to teen suicide.
Naturally, being a teen, I had to check it out for myself. Suffice it to say, I became a long-haired,
torn-jeans-wearing, head-banger with Iron Maiden, Black Sabbath, Metallica, and Slayer serving
as my music of choice.
Getting back to your question, my tastes have mellowed and broadened a bit, but Heavy Metal
is my go-to choice when it comes to writing. What can I say? Some people like Red Bull, but I
get amped to write by plugging into something with guitar riffs that make your hair stand on end,
and a drumbeat that mimics the charging hooves of the Four Horsemen of the Apocalypse!

Do you need anything to write? (ex. chocolate, music, slippers) :)
Time and, of course, Heavy Metal … but mostly time. While I am thankful to have a job, I hope
and pray that enough readers will love and support my work that I can begin writing fulltime.

How long do you write on any average day?
I used to have an online woodworking business, but now work fulltime as a customer service
manager at a furniture store. Since I really enjoy my wife’s company after work, I choose
to write from around 4:30 - 7:30 am. For some reason when I get close to finishing a book,
a peculiar, unnamed affliction always brings me low, forcing me to call in sick. When that
happens, I find it therapeutic to write all day long :)

Give us the number one reason to read your book.
I wanted to write something that I enjoyed writing and reading, in the hopes that others would
as well. I wanted to tell a story that moves with a purpose, that grabs you by the heart and drags
you along, whether you want to go or not. I wanted it to be direct and engaging, a story where
you connect with the characters and their plights, a story that makes you want to stand next to
the hero, experiencing all their ups and downs. Mostly I wanted to open a doorway in the veil
between our world and somewhere else, a place that at first blush seems familiar, but really is
not. With The God King, the door is now open. I am not entirely sure what lurks on the other
side. I have seen shadows in the mist, and they have whispered to me, let me in on a few of their
secrets, but they have held back far more than they have revealed. One way or another my course
is set, and I intend to explore and adventure across the mysterious world that awaits beyond the
veil and through the doorway. I hope others will join me.

Heroes are not born, they are forged in the fires of apocalypse...
In the heavens above, the three moons crash together, streaming fire and death in their wake; below, the seas rage as the roiling face of the world shatters. After Prince Varis Kilvar steals powers to transform himself into a god, chaos reigns from the king's city of Ammathor to the forbidding walls of the Black Keep. At his heels marches a demonic army torn from the very bowels of the Thousand Hells, and the risen God King uses terror to stake his claim over all lands.
Betrayed and bound to Varis by powers he does not understand, mercenary Kian Valara is forced to masquerade as the world's savior, while a beautiful Sister of Najihar prepares him for his last battle. Victory against a living god is far from certain, but vengeance? For Kian, when the battle rage falls upon his soul and the sword hilt is hot and alive against his palm, vengeance is never out of reach.

Thanks for stopping by! James West has generously offered to giveaway one ebook copy of his book The God King in any format via SmashWords.