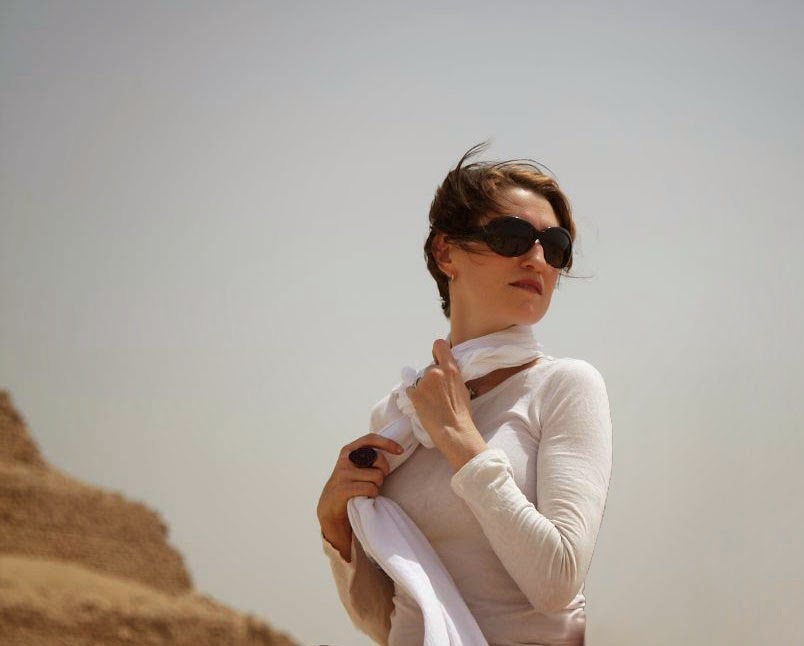 Inspired by her son's disappointment in the impossibility of the magic found in young adult novels, Eden Unger Bowditch created the Young Inventors Guild series to tell a story about science—the kind of magic that’s all around, and the kind people can actually do. Growing up in Chicago, Eden later lived both in Los Angeles, Paris, Baltimore, and in Egypt with her husband and three children. She is the author of several nonfiction books about her longtime hometown, Baltimore, and has been a journalist, a welder, an editor, and musician. For more information, visit: http://www.younginventorsguild.com/

Favorite reads?
For YA books, I love Rick Riordan’s first series of the Olympians. The Lightning Thief is great. The Garth Nix series Keys to the Kingdom; P.B. Kerr’s The Children of the Lamp; Neil Gaiman’s Graveyard Book. Other book favorites are Mark Haddon’s The Curious Incident of The Dog in the Night and Jasper FForde’s Thursday Next books. And, of course, Harry Potter. And the list goes on…

Inspirations for the book?
My kids and the idea that invention is the magic you can do. I feel like I write books I would love to read myself, stories that would be exciting and fun and mysterious.

Did you know you wanted to be an author when you were little?
I don’t think I planned or thought about it but I look back and realize virtually everything I’ve done has been writing. I do think I have always wanted to write. Funny, but when I’m at an event and someone says that they want to hear from the author, I look around excited to see the author. Then I realize it’s me! It’s still a shock and a thrill.

Any Pet Peeves?
I love research and getting to be a detective. I have great respect for the intelligence of the reader and for the author that takes the time to make it real. I get irked when I feel an author cheated and didn’t do the research. It’s a little creepy. When something rings false, it takes the reader out of the adventure of the story and makes you feel that you’re putting more into the book than the author did. I must put in hours and hours per page, sometimes just to be sure I have a single fact right. Also, it’s a drag when reviewers don’t take the time to really read what they’re reviewing…when a reviewer clearly didn’t read the book, or didn’t read it carefully. Or when a reviewer makes an assumption without thinking. I had one reviewer complain about the meaninglessness of double titles when they do have a purpose and a reason for being there.

Chocolate or Peanut Butter?
You mean you’d separate them from one another?

The weirdest thing you've ever done?
Besides having babies come out of my body? There are so many…but I suppose one must be traveling around the country, touring and playing in a band with my husband and our drummer and having a new baby in tow. Oh, yeah, and moving to Cairo, Egypt must be up there with weird choices.

Is there a soundtrack to the book/Favorite music?
Since the book takes place in the Victorian era, I’d certainly want music that goes with the time. That said, Aimee Mann and Michael Penn are amazing at that. I’m sure there are fabulous musicians who could score the film, but if anyone could make it come alive, I am sure they could.

Do you need anything to write?
When I have an idea, I have been known to write on the back of my kids’ homework, on the inside lining of a paper hanger, on my hands, on my children’s hands, on my dog…it can get embarrassing. Sometimes, when I am actually at the computer and working, sometimes I like music, other times not. Sometimes I like quiet, sometimes the chaos and noise of family around me. I’m not very idiosyncratic…though I’d not say no to chocolate, now that you asked. Or slippers.

How long do you write on any average day?
If I am in the middle of an intense moment, I might sit down to jot something down and then notice that the light is gone from the sky and I’ve been there all day. Other times, I might have a few minutes and I’ll fill in a scene that comes to me. I guess I could say somewhere between 2 and 12 hours per day.

Give us the number one reason to read your book.
Because reading is awesome and this is an adventure! This book is full of science and invention, the magic you can do. It will take you on a journey to places that will surprise you. 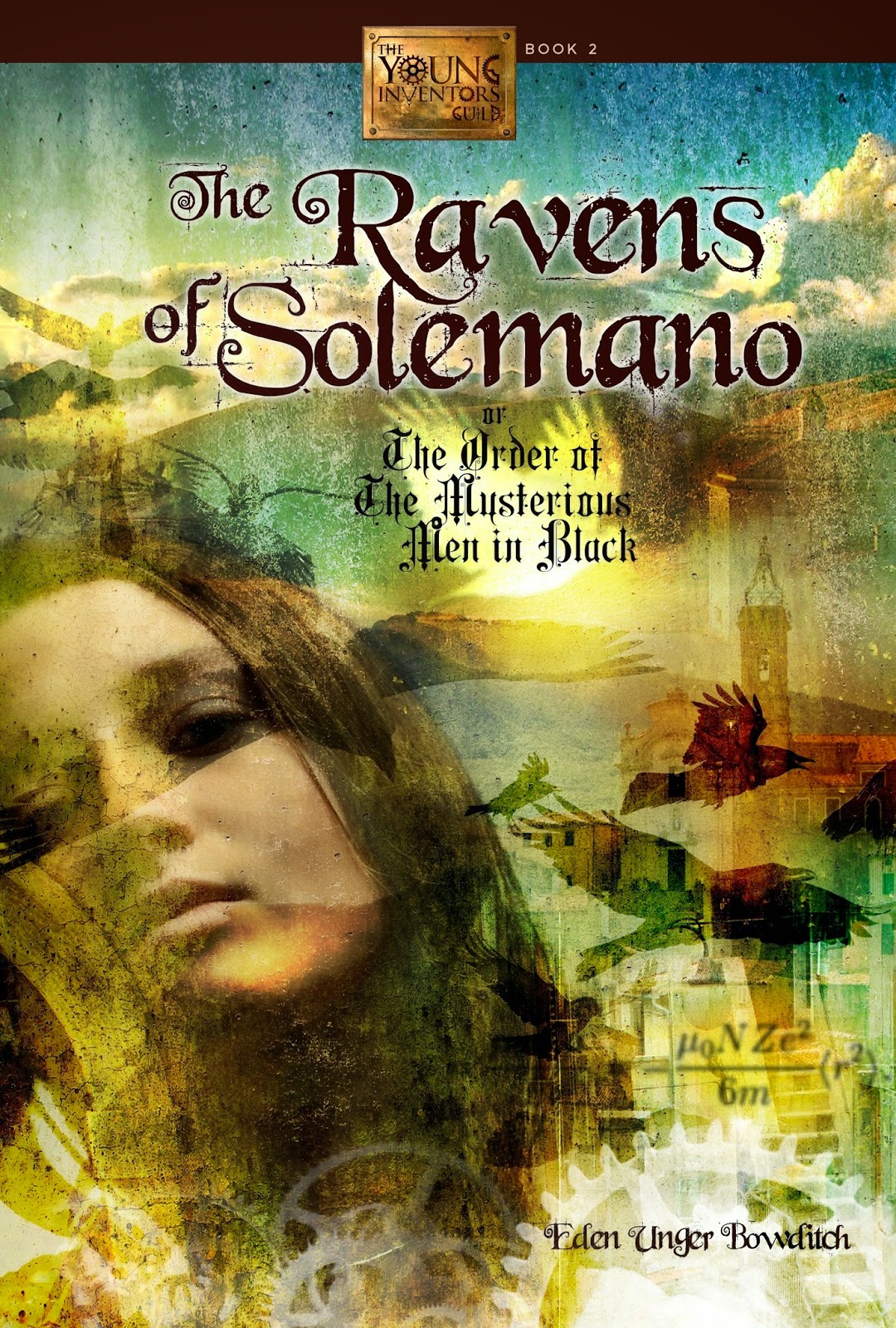 It has been mere days since the brilliant children of the Young Inventors Guild escaped from the clutches of the horrible Komar Romak.
They've escaped with their lovely and caring schoolteacher, Miss Brett; with their long-absent parents; and with their bizarre captors, protectors, or both--the mysterious men in black. And now they travel by train, destined for parts unknown.
But a note torn from the hand of a dead man in a New York tunnel guarantees that safety is an illusion. When the children's world is blown apart, life will never be the same again.
Soon, the children--Jasper and little Lucy Modest, from London, England; Wallace Banneker, from New York, United States; Noah Canto-Sagas, from Toronto, Canada; and Faye Vigyanveta, from Delhi, India--find themselves in the ancient Italian village of Solemano, deep in a mystery that spans centuries. As they inch toward the truth of the men in black and the secrets they keep, one terrible fact remains:
Komar Romak is still out there. He's still after them, for reasons they can't even begin to imagine.
And he knows exactly where they are . . .
From the rolling plains of America to the wide-open waters of the Atlantic, through the Strait of Gibraltar to a remarkable village in the hills of Abruzzo, Italy, The Ravens of Solemano or The Order of the Mysterious Men in Black, the second book of Eden Unger Bowditch'sYoung Inventors Guild trilogy, is an adventure like no other, as the children draw ever closer to the answers to the mysteries that surround them.