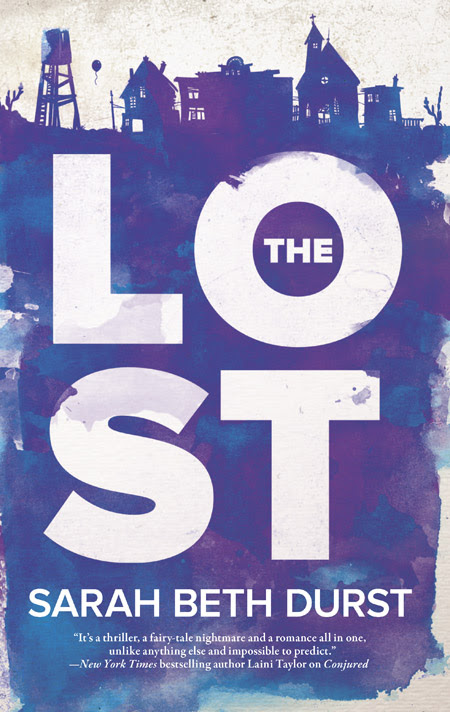 
Your dreams?
Yourself?
Welcome to Lost.
It was supposed to be a small escape. A few hours driving before turning around and heading home. But once you arrive in Lost...well, it's a place you really can't leave. Not until you're Found. Only the Missing Man can send you home. And he took one look at Lauren Chase and disappeared.
So Lauren is now trapped in the town where all lost things go-luggage, keys, dreams, lives-where nothing is permanent, where the locals go feral and where the only people who don't want to kill her are a handsome wild man called the Finder and a knife-wielding six-year-old girl. The only road out of town is engulfed by an impassable dust storm, and escape is impossible....
Until Lauren decides nothing-and no one-is going to keep her here anymore.


As far as heroines go, Lauren Chase is nothing special: no prophecy about her future, no strange powers since birth. And because of this, she is incredibly relatable. I fell in love with her as she struggles to come to terms with her new world and the mother she's losing. Her motivations ring true and she feels real, clever and sturdy, with no moping about but a matter-of-fact view on life. But, however fantastic she may be as the lead, the character that takes the cake for me is Peter (the Finder in Lost who rescues lost people from the death grip of the void). With cat-like grace and a somewhat mischievous streak to him, it's entrancing to read about him. I agree with Lauren completely when she describes him as a grown up Peter-Pan. He pops in and out of scenes perfectly representing what a man of that past would be, but does it so well that he sweeps all the stereotypes away and practically reaches the status of archetype. If he was the only good thing in the book, I would still gobble up the sequels. Thankfully the entire book is quite good.
Characters: 5 Stars

It is a very rare author that can take a simple idea -- say, a place where all lost things go -- and flesh it out into such a thoroughly satisfying mix of thriller, romance, and self-discovery. Right from the beginning, Durst's delicious prose paints a disturbingly hypnotic view of a town that exists apart from time, where all lost things go. And all lost people. People who have lost their way in life do not make for a very stable citizenry. Feral dogs roam the streets in packs and bands of ragged scavenger children armed with knives comb through frequent junk piles in a world built on the barter system, all surrounded by a dust storm called the Void that sucks the hope from those that enter until they become nothing more than dust themselves. No one and nothing can leave Lost until they find whatever it is they have lost. But even then, the Missing Man is the only one who can send them home. He refuses to help Lauren, and disappears. Struggling to simply survive, Lauren is forced to face her own despair head on to discover what she's lost. And the Void creeps steadily closer. In this well-brewed tale the stakes never stop rising. This book will rip your heart out and stomp on it every which way. Thank goodness it's the start of a series! And you'd better bet I'll be counting down the days until I can get my hands on the next one.
Plot: 5 Stars

Sarah Beth Durst is very good at what she does. Her rich descriptions and hearty characters bring the story alive with such oomph it will leave you gasping. I tried, goodness knows how I tried, to read this book slowly, to savor every mesmerizing word, but it ended far too quickly. A strong start to a very promising series. Stunning. Transfixing. Captivating:
Style: 5 Stars