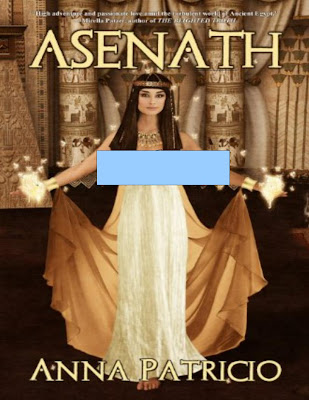 Excessive Cleavage Covered For Your Benefit :)
Asenath is a debut historical fiction novel based on Joseph (yes, the one with the coat)'s wife, Asenath.
Cover Blurb:
Two Destinies...One Journey of Love    In a humble fishing village on the shores of the Nile lives Asenath, afisherman's daughter who has everything she could want. Until herperfect world is shattered.    When a warring jungle tribe ransacks the village and kidnaps her,separating her from her parents, she is forced to live as a slave. Andshe begins a journey that will culminate in the meeting of a handsomeand kind steward named Joseph.     Like her, Joseph was taken away from his home, and it is in him thatAsenath comes to find solace…and love. But just as they are beginningto form a bond, Joseph is betrayed by his master’s wife and throwninto prison.     Is Asenath doomed to a lifetime of losing everything and everyone she loves?


I can honestly say that a small part of me has always wondered about Joseph's wife, and this provided a welcome sketch of how things might have been.
Asenath was a girl who, while sometimes a wallflower, was very loyal to those she loved. In many  love-triangles the heroine is often portrayed as confused and helpless. But I didn't get that from Asenath, and I could clearly see how her actions were affected by her past. Joseph, though a bit too perfect to be realistic, was very romantic and interacted well with Asenath. I did feel that sometimes her parents weren't true to their characters, but it was refreshing to read a book where the parents are actively involved.
Characters: 3.5 Stars.
Almost everyone knows the story of Joseph and his coat of many colors, if not from the Bible then from Broadway. And, while building on that story, this book enlarged an aspect that is usually only lightly mentioned. As far as villains and action go, it wasn't as developed as it could have been. But the romantic scenes were enough to push it forward and it provided a good read for a slow day.
Plot: 3.5 Stars
The setting and language of this book lent itself more towards King Arthur's court rather that Ancient Egypt, and it took away from the book considerably. But I could hear the author's voice throughout the story and could tell she definitely enjoyed writing. Her enthusiasm wore off and made it fun for me as the reader.
Style: 2.8 Stars