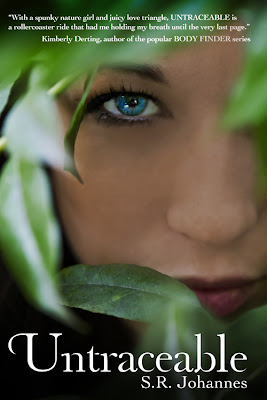 Untraceable is a young adult wilderness thriller and the first in a series by S. R. Johannes.

Cover Blurb:
16-year-old Grace has lived in the Smokies all her life, patrolling with her forest ranger father who taught her about wildlife, tracking, and wilderness survival.     When her dad goes missing on a routine patrol, Grace refuses to believe he’s dead and fights the town authorities, tribal officials, and nature to find him.     One day, while out tracking clues, Grace is rescued from danger by Mo, a hot guy with an intoxicating accent and a secret. As her feelings between him and her ex-boyfriend get muddled, Grace travels deep into the wilderness to escape and find her father.     Along the way, Grace learns terrible secrets that sever relationships and lives. Soon she’s enmeshed in a web of conspiracy, deception, and murder. And it’s going to take a lot more than a compass and a motorcycle (named Lucifer) for this kick-butting heroine to save everything she loves.


This book was a satisfying read and held so much more than I expected.
While Grace (Main Character) was your average strong female lead, her first-person perspective allowed the reader clear insight into how her mind worked. I could feel her determination to save her father and her pain over her crumbling world. Mo (Romantic Interest) was very ... well, romantic but he seemed to fall for Grace a little fast. And there was one instance at the end, due to a plot twist, that I didn't think was consistent with his character. However, throughout the rest of the book there was very good chemistry between him and Grace.

Characters: 4.3 Stars
The starting premise is simple, Grace wants to find her missing dad or reach closure about the situation. But as she uncovers more and more clues, whole new dimensions of the mystery are unveiled. Dashing from one scene to the next, Grace barely manages to stay ahead. The climax was entrancing and the ending poignant! Untraceable will flow easily into the sequel.
Plot: 5 Stars
S. R. Johannes' touch was subtle but strong. Somehow action-packed moments managed to convey a quiet thoughtfulness as well as painting a vivid picture of Grace's demons. As Grace tried to untangle her confused life, steady themes emerged and suddenly the title, Untraceable, held enormous importance.
Style: 5 Stars

Rating: 4.8
Source: From Author For Review
Genre: Thriller
YA Fiction