Michael is a graduate of Brigham Young University with a degree in German Teaching and a minor in Music. He puts his German to good use by working to build online German courses for High School students. Though he grew up traveling the world with his military father, he now lives in Utah with his wife, Jen, and his two sons. Michael enjoys acting in community theater, playing and writing music and spending time with his family. He played for several years with the handbell choir Bells on Temple Square and is now a member of the Mormon Tabernacle Choir.
He is the author of the novels THE CANTICLE KINGDOM and THE LAST ARCHANGEL. He is also the author of the inspirational pamphlet PORTRAIT OF A MOTHER. He has also had work featured in various online and print magazines such as Mindflights,The New Era, Allegory, and Ensign.

-Inspirations for the book?
My time spent living as a missionary in Europe and learning about the vast religious traditions  and imagery from many different cultures.

-Did you know you wanted to be an author when you were little?
Yep. I still have very imaginative stories I wrote when I in Kindergarten. I didn’t get really serious about it until I hit high school, however.

-Chocolate or Peanut Butter?
Peanut butter all the way.  Though, when the two team up, it is pretty tasty too.

-Is there a soundtrack to the book/Favorite music?
I would have to cite the music I used in my book trailer, which is called “Requiem for a Tower” and was first used in the movie trailer for “The Two Towers”, and was based on the song “Lux Aeterna” from the movie “Requiem for a Dream”.

-Do you need anything to write? (ex. chocolate, music, slippers) :) I usually listen to music, often soundtracks or things without words. I have a favorite recliner in which I do most of my writing.

-How long do you write on any average day?
I manage between two to three hours of writing on an average day.  I get most of it done after the kids go to bed and the house is quiet.

-Give us the number one reason to read your book.
The sheer amount of imagination that went in to crafting it. 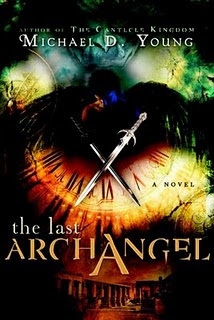 Xandir has been exiled to earth until the end of time. But when his cherub trainee disappears, Xandir makes a deal with rogue angels and giants that could restore life to the mortal woman he loves and end his assignment as a destroying angel in exchange for helping them bring about the end of the world and all of mankind. 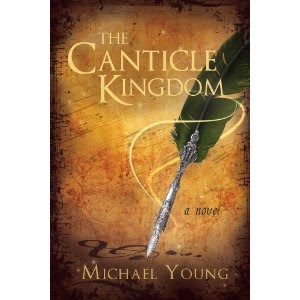 When a young blacksmith s apprentice named Johann discovers that his homeland is contained entirely within a small music box, it s up to him to protect the only home he s ever known. With the help of an impossibly ancient knight, his best friend, Brigitta, and his trusty homemade sword, Johann races to find the only people who can who can stop the dark power that threatens to destroy the Canticle Kingdom an unsuspecting family and an old woodcarver from the outside world. Enter a world full of magic, danger, loyalty and bravery in this exciting debut from Michael Young, and discover that even the most ordinary objects and people might be hiding something truly wonderful inside.

Michael Young has generously offered to give away one paperback copy of his book, The Canticle Kingdom!
*Giveaway*(US Only)
Ends Feb. 2 (2/2/12)
Mandatory:
Follow this blog through GFC