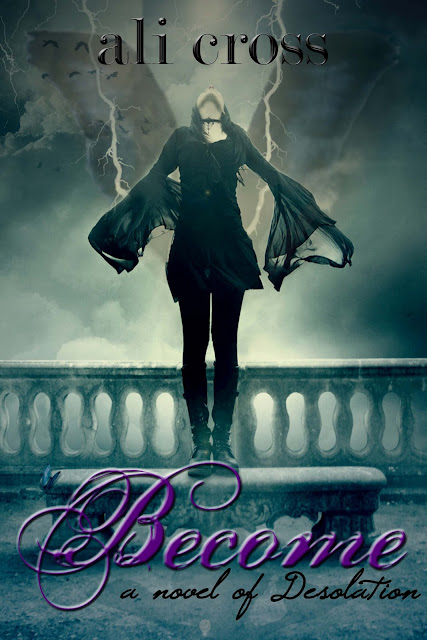 Become is the debut book of author Ali Cross, and the first in a promising new series.
Cover Blurb
Sixteen-year old Desolation Black wants nothing more than to stay in Hell where it’s cold and lonely and totally predictable. Instead, she’s sent back to Earth where she must face the evil she despises and the good she always feared.    When Desi is forced to embrace her inner demon, she assumes her choice has been made—that she has no hope of being anything other than what her father, Lucifer, has created her to be. What she doesn’t count on, is finding a reason to change—something she’s never had before—a friend.


Before I start this review, I feel inclined to say that, due to some issue I had with the content*, I actually didn't finish this book. But I believe I read enough of it for the review to be somewhat useful.
I loved the fact that, though Desi (Main Character) was born into such an awful family circumstance (Lucifer as a dad is pretty hard to beat!) she showed that there is always a choice to be made. At a few points in the story she turned into an indecisive, unsure person, but quickly recovered and was able to lead the plot forward steadfastly. The chemistry between Desi and Michael (Love Interest) was very smooth. Michael was every girl's dream. Sometimes he seemed almost too good to be true, but he never turned into a bore. And I found myself rooting for Miri (Desi's Friend) the whole time.
Characters: 4 Stars
I could not put the book down! It was a beautiful concoction of action and reflection, jumping from development to development. The later half of what I read was starting to slow, and a few elements were confusing. But the overall view made sense.
Plot: 4 Stars
In many young adult books there aren't really any consequences for the characters' actions. But in Become, ever action had a reaction. And the idea that, though we can't choose our circumstances, we can choose our actions, became a very strong theme. I loved how Ali Cross used these ideas to build a strong steady core for her book. Her writing was clear and engaging.
Style: 4.6 Stars

*As a fight between angels and devils, with the Viking gods making up the world creators, I found this particular world against my religious views (I realize it was for fictitious purposes, and very likely doesn't represent what the author believes :). It wasn't offensive, but for personal reasons I decided not to finish the book.
Posted by Valette M. at 8:00 PM