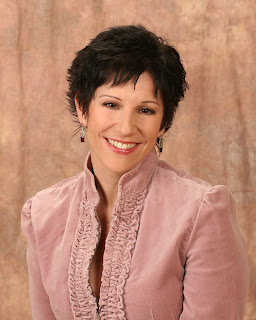 Lauren Baratz-Logsted is the author of 31 books for adults, teens and children. You can read more about her life and work at laurenbaratzlogsted.com or follow her on Twitter at @LaurenBaratzL

Inspirations for the book?
I got the idea for the Book 1 in the Hat City Middle School Series, GUYS AGAINST THE GIRLS, from something that happened at my daughter's school a few years back. They had a substitute one day who favored the boys so heavily, she ignored it when the girls raised their hands, and then actually had the nerve to smugly say, "Just as I always thought - boys *are* better at math than girls!"
I got the idea for Book 2 because a boy who read the first book was so tickled by the character of Robbie Knightley, I realized Robbie needed his own book, hence ROBBIE KNIGHTLEY.

Did you know you wanted to be an author when you were little?
I had an inkling.

Chocolate or Peanut Butter?
It has to be chocolate. After all, when it comes to candy, peanut butter needs chocolate, but chocolate can just go it alone.

The weirdest thing you've ever done?
You make it sound like it should be easy to pick just one. How about *a* weird thing I did? For about a dozen years I had a writing group that met in my condo every Friday night. One week, someone remembered hearing that Mars was supposed to be visible with the naked eye, so, at around 11pm, we all headed outside and began running around the condo complex, necks craned upward, looking for something red. Finally, after about an hour, we saw the taillight of a plane, decided it was Mars, and headed back inside.

Is there a soundtrack to the book/Favorite music?
There is not a soundtrack to either Book 1 or Book 2 in the series. I love a lot of music from Frank Sinatra to the Rolling Stones to Green Day to stuff so modern I don't know who the bands are when I hear the songs on the radio.

Do you need anything to write?
Nope, I'm not a picky writer. If I'm really in the zone on a book, I can even keep typing while listening to "General Hospital" on the TV in my office and answering my husband's questions.

How long do you write on any average day?
When I'm working on a book, I write pretty much straight from when I drop my daughter at the bus stop at 7am until when I pick her up at 4pm.

Give us the number one reason to read your book.
Wait a second. I answered the chocolate v. peanut butter question honestly and now I have to *sell* myself too? OK, because The Sisters 8 series for young readers sold 200,000 copies, I get more fan mail for that than anything I've ever done as a writer - I've had over 30 books published - and I still hear from kids ever day wanting more. OK, so maybe that's a good reason why you should read The Sisters 8, but maybe this series is good too. It's new! Give it a chance!

There's trouble at Hat City Middle School! This first volume in an exciting new series by the author of the popular Sisters 8 series introduces readers to the six guys and six girls who make up a special class at Hat City Middle School. When a substitute teacher says something she shouldn't, the girls are outraged. Then their regular teacher makes matters worse, and everyone is outraged. Soon the guys and girls are facing off about everything, but will it end in victory or disaster? Told in alternating first-person plural viewpoints, GUYS AGAINST THE GIRLS is as original in its execution as any middle-grade novel out there today.
Find more info here.

A modern-day Dennis the Menace, Robbie Knightley stumbles through life annoying the next-door neighbor, frustrating his teachers and perplexing his parents, who can't quite understand why he's so different than his six older sisters. When Robbie opens his Christmas presents prematurely without remorse for the second year running, his parents consult his therapist grandfather and Robbie hears his parents say they think there's something wrong with him, something missing. Robbie decides he'll get by in life by keeping his mouth shut and avoiding spending too much time with other people. But when a five-day class trip is unexpectedly moved up and he can't get out of it, Robbie fears the worst: that his friends will see him for who he really is, a boy with something missing.
Find more info here.