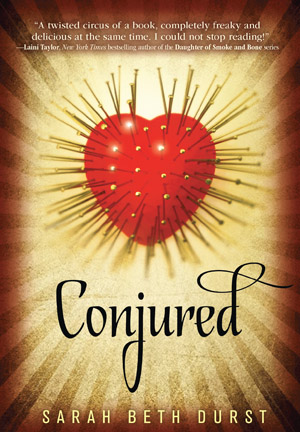 Conjured is the newest stand alone by Sarah Beth Durst

“A twisted circus of a book, completely freaky and delicious at the same time. I could not stop reading!” --Laini Taylor

Synopsis:
Eve has a new home, a new face, and a new name—but no memories of her past. She’s been told that she's in a witness protection program. That she escaped a dangerous magic-wielding serial killer who still hunts her. The only thing she knows for sure is that there is something horrifying in her memories the people hiding her want to access—and there is nothing they won’t say—or do—to her to get her to remember. At night she dreams of a tattered carnival tent and buttons being sewn into her skin. But during the day, she shelves books at the local library, trying to not let anyone know that she can do things—things like change the color of her eyes or walk through walls. When she does use her strange powers, she blacks out and is drawn into terrifying visions, returning to find that days or weeks have passed—and she’s lost all short-term memories. Eve must find out who and what she really is before the killer finds her—but the truth may be more dangerous than anyone could have ever imagined.

The main character has amnesia. Yep. This means she had no background to build her up or give us a sense of who she is. And she is brilliant! Sarah Beth Durst did not take the easy way out in forming Eve. Breaking through the now cliché kick-butt, sassy, heroine mold, Eve starts the book as a confused, quiet character. As the story unfolds however, her core of iron is revealed. She is strong and smart, not wasting time on disbelief when something is on the line. She takes help when help is needed, she gives it too. (On a side note, it was refreshing to have a character that was nice, not just to the people she liked, but as a general rule, caring of others. This almost seems frowned upon in YA. Anyone know why?) She's a character to root for even though, at first, the reader has no idea which side she comes from. Or if she's even human. Or even real. However impressed I was by Eve, the villain impressed me more. Introduced and developed only vaguely through Eve's flashbacks and comments, he is terrifying, yet understandable. Though he only appears in person towards the end of the book, his actions and words are so descriptive of who he is that he gained depth with very little face time. Such a disturbingly twisted man does not deserve sympathy, yet its' garnered nonetheless.
Characters: 4.8 Stars

This was another one of those books that gets the badge of being read straight through. The plot itself unfolded in the form of a knot with just as many seemingly unrelated strands– starting in the middle and slowly being picked apart until the whole tale was clear. As Eve experiences deeply haunting visions, we begin to get a sense that we know nothing at all. And we don't. But the story proceeds with tantalizing hints and gradually zooms out to get the big picture. Eve experiences flashes of amnesia, or memory resets. She comes to herself with no memory of the weeks or months she's lived between. The uncertainty and fear keeps the reader in a very shaky place and then buffets them too and fro with Eve. I had no idea how things would conclude in one book, without selling short. It defied expectations. (Which, come on, this is Sarah Beth Durst so expectations were already pretty high to begin with.) It ended with a satisfactory umph, but left much more to explore.
Plot: 4.8 Stars

Conjured was darker and more gruesome than I usually read (or would want to read again), bordering on the macabre. But the writing itself was beautiful with glittering descriptions and elegant language. It flowed smoothly, not straining, not presumptuous. It was unlike Sarah Beth Durst's other books in overall feel, and proves just how versatile we can expect her writing to be. She is absolutely getting added to the list of Authors to Watch For.
Style: 4.8 Stars