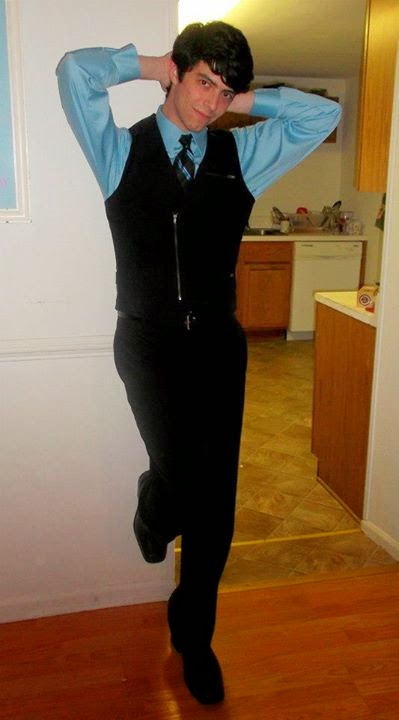 Austin Pierce is a senior at Washington & Lee University, where he studies economics, philosophy, and East Asian language & literature. Although his university does not have a creative writing major, Austin has maintained a strong presence in the field, serving as the co-founder and managing editor of the Spanish-language literary magazine Pluma. His short story Depths - building on the world introduced in Shards in the Darkness - will be published in the American Mensa Association's Calliope later this summer. Aside from literature, Austin spends his time singing, dancing, studying languages, working with multicultural groups, and running "murder mystery" style games for his friends and fellow students. After graduating, he plans to continue writing while pursuing an advanced degree.

Favorite reads?
As for fantasy, my favourites are His Dark Materials by Philip Pullman, the collected works of C.S. Lewis, the Silmarillion and the Lord of the Rings by JRR Tolkien, the Prydain Chronicles by Lloyd Alexander, The Dark is Rising Series by Susan Cooper, and The Secrets of the Immortal Nicholas Flamel by Michael Scott. I'm also a large fan of Jane Eyre and the collected works of Thomas Hardy.Did you know you wanted to be an author when you were little?
Actually, no. I thought I was going to go into politics or science, but I had been enamored with many great books as a child - the Just So Stories of Rudyard Kipling; the myths of the Greeks, Egyptians, and Nords; and the Chronicles of Narnia by C.S. Lewis to name a few - and with time, I found myself writing. Other figures, such as Octavio Paz and Kahlil Gibran, helped me to exercise my pen as a poet, and I eventually expanded that skill in the form of short stories and novels.Chocolate or Peanut Butter?
Oh gosh...do I have to pick? Dark chocolate smothered in peanut butter is so good!How long do you write on any average day? -
Well, I'm still in school, so my time for writing is stretched pretty thin. However, on days when I can write, I generally write for two or three hours.Give us the number one reason to read your book.
The world. In reading this book, you'll meet new races of creatures. And the humans are divided into rich cultures replete with history and complex relations. I've been told that the world is absolutely engulfing for the reader.Author Info:
You can find Austin's website, with links to Shards in the Darkness and several of his other works, at theaustinpierce.com (a work in progress!). You can follow him on Facebook at https://www.facebook.com/pages/Austin-Pierce/325832237566257.

The first book in Austin Pierce's Shards in the Darkness epic fantasy series is set in an engulfing world sure to ensnare and entrance any reader as they follow Tauryn and Eilyn's journey.


Perfect for fans of the Prydain Chronicles or Lord of the Rings, Shards in the Darkness transports the reader to a world rich in cultures, creatures, intrigue, and long-ignored histories. And that world is on the brink of radical change.
Tauryn is chasing the mystery of a set of shards only to be chased in turn by those who might actually hold the answers. A foundling raised by a village smith, Tauryn has always longed to see the world. However, his chance comes only when an attack forces the local noble to send an age-old artifact to his cousin in the capital. Although waylaid several times, Tauryn finds himself joined by several allies on his journey.
But they aren’t the only ones on the move. Several groups accost Tauryn on the road. Primordials are resurfacing with frightening regularity. And most threatening of all, great shadows have once again infiltrated Tauryn’s homeland of Praelia. Powers from all directions are trying to obtain the shards, and at any price.


Chapter 1 – A Glimmer of Change

Glints of light flashed in the darkness; a storm was brewing, but even the streaks of lightning and roars of thunder could not incite the same terror as the rising scream. A cloaked figure ran down the corridor, a bundle clumsily wrapped in the folds of cloth. The shadows of angry caretakers took form behind her. It was from here that the grating screeches emanated. They were clawed, with wrinkled skin and hair as black as midnight.
“After her!” one of them yelled.
The cloaked figure desperately tried to pick up her pace, her hood flying off to reveal a mass of bouncing, curly brown hair as she raced down the twisting corridors.
Her feet held steady. It was her long cloak that finally betrayed her strides, catching her beneath its folds.
As she fell, the item she had been carrying broke loose, a disk of silvery-white. The disk started to roll beyond the woman’s clutches, but she grabbed it just before it could slip out of reach.
Her hunters, however, howled triumphantly, “We have you now!”
The gloating could not last long. At that moment, the cloaked woman raised the disk above her head, mumbling incoherently. The disk caught the attention of the gathering clouds, bolts of lightning lashing towards it and licking it as the woman dashed the disk onto the ground.
A cacophony of sparks and fury erupted, but it was too late. The cloaked woman had vanished. And even as the hunters stooped to gather the pieces of the broken disk, the shards vanished beyond their senses.
The fragments spun in the dark, casting glints of light in their own blackness. One of them began to fall. Reflected on its surface, the cloaked woman stumbled through a torrent of snow. She was older now, her frizzy hair gone white and her skin having taken on a pale grey tone. She cried out, but the sounds were quickly lost in a flurry of the blizzard.
Another shard followed the first. On its face, a red-headed woman tried to comfort a man who was crying relentlessly.
“There there,” she said in a matronly tone, “I told you there was no chance of it.”
As they stood, the shard began to turn over on itself, and without a moment’s hesitation, the other shards plummeted as well, until the whole mass was swarming downwards.
Myriad images flashed across their surfaces. Deep ocean currents spurned the waves into battle with the land. Clans of giants destroyed each other on mountain peaks. Patterns of sigils accompanied an incessant droning. These and more flickered in the glimmers until the shards fell so far that even their light was swallowed in the yawning darkness.
Posted by Valette M. at 12:00 AM