Fantasy author Kristen S. Walker dreams of being a pirate mermaid who can talk to sharks, but she settles for writing stories for teens and adults. She lives in northern California with her family and two rescue cats.

Favorite reads?
My favorite books are YA fantasy like Tamora Pierce's Tortall novels, Ursula K. Le Guin's Earthsea Cycle, and Robin McKinley's The Hero and the Crown. I love all of these books because they feature fantastic magic, awesome dragons, interesting worlds, and of course, kick-butt female characters.

Inspirations for the book?
I've always loved witches and stories about magic in the modern world, but in most books, the magic is something hidden or secret to most people. I wanted to write a story where the magic was out in the open and think about how that would change the things we take for granted. I also wanted to write the book that my fifteen-year-old self wanted to read. And finally, this book was inspired a lot by my real life. I have to put in the disclaimer that my mom is awesome and Rosa's mom is in no way based on her! But I've had a lot of people in my life who tried to control me and it was a struggle to win my freedom.

Did you know you wanted to be an author when you were little?
Absolutely. I carried around a notebook like Harriet the Spy and wrote all the time. My mom saved some of my little handmade books. When I got older, I put writing on the backburner for a while because I was afraid that I wouldn't make money as an author and I needed to get a "real job". But I realized that I had to take a chance on my dream or I'd always regret it. I've come to realize that the money is less important than knowing that people read and enjoy my stories. Every time someone tells me that they liked my books, I know it's worth it.

Any Pet Peeves?
In books, I don't like characters that fall in love instantly because they're soulmates or somehow destined to be together. In real life, I don't like it when people leave their shoes lying around on the floor.

Chocolate or Peanut Butter?
Both, preferably together! I should own stock in Reese's, because I eat so much of their candy. 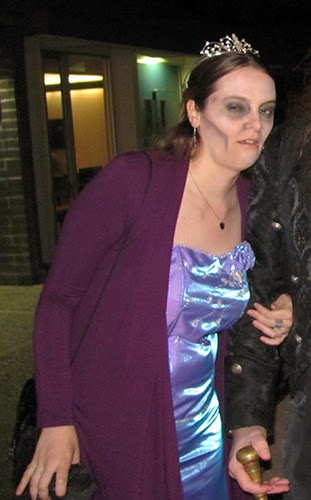 Hm, this is a tough one, because my family does a lot of weird things! Recently, I went to a "zombie prom", which was a lot of fun because I dropped out of high school before my 'real' prom. It was fun to wear an elaborate prom dress with scary zombie makeup. I've done a lot of dressing up for different events, though, like anime conventions and Renaissance faires. It's always interesting when I have to stop in a store or something on the way to the event, because I get so many weird looks.

Is there a soundtrack to the book/Favorite music?
When I wrote the book, I mostly listened to music that reminded me of being a teenager, so late-90s/early-00s female singer-songwriters like Vanessa Carlton, Michelle Branch, Lisa Loeb, and Natalie Imbruglia.

Do you need anything to write?
I usually listen to music while I write, but I'm pretty flexible. I've written everywhere from my couch, to the car, to the beach.

How long do you write on any average day?
Usually I get about three hours in of solid writing, depending on my schedule.

Give us the number one reason to read your book.
If you've ever thought that your parents were too controlling or invaded your privacy unfairly when you were growing up, you'll relate to Rosa and her problems with her mom. 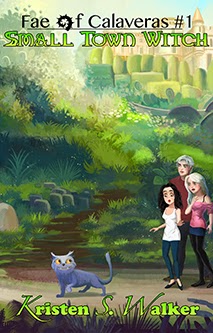 The perfect life . . . or the perfect lie.Teen witch Rosamunde thinks she has it all: friends, parties, a happy family, and magic at her fingertips. But something dark lurks underneath the surface. When Rosa uncovers strange spells in her house, the illusion of the perfect life begins to crack, hinting at family secrets she never imagined.With the help of her friends and the handsome kitsune Kai, Rosa peels back the layers of lies. Her search for the truth will take her far from home, into the dangerous Land of Faerie . . . but if the truth threatens her family’s apparent happiness, which she choose to live with the lie or break the enchantment that binds them all?