Greg Spry has immersed himself in science fiction since he was old enough to obliterate Lego star ships with Lincoln Log photon torpedoes. He writes fast-paced yet thought-provoking science fiction with thoughtful, tortured characters caught up in ethical dilemmas where the fate of the universe hangs in the balance. He's a forward-thinking person who always has an eye on the future, although he yearns for the good old days when there were nine planets in the Solar System (props to you, Pluto).
Since graduating from the University of Wisconsin-Madison in 2001, Greg has worked in the IT and computer programming industry. During that time, he's learned web design, search engine marketing, entrepreneurship, and other skills which help aid him in developing his author platform. He's also participated in multiple writing and critique groups, honing his craft while helping others to do the same. An M.S. Space Systems degree from the Florida Institute of Technology helps him craft sci-fi that's as realistic as possible.

Favorite reads?
My favorite authors include Arthur C. Clarke, Peter Hamilton, Alastair Reynolds, Orson Scott Card, and Jack McKinney (I read the Robotech book series from start to finish at least three times in middle school and high school). I also think books by Dan Brown and Suzanne Collins's live up to the hype. As you might've guessed from my list of authors, I tend to read books that fall into the genres in which I write: hard sci-fi, space opera, and other science fiction.

Inspirations for the book?
My chief inspirations for Beyond Cloud Nine (BC9) came from the Anime I watched growing up: Robotech, SDF Macross, Macross II, and Macross Plus. Thanks to Star Trek: TNG and Captain Picard, my main protagonists will always face a moral conundrum. I've also pulled plot and character elements from the books/authors I've read (see above) and video games. There was a game I used to play as a kid for the Sega Genesis called Target Earth. I started with the plot of that game and twisted the overdone alien invasion angle to my advantage in order to create the story for BC9.
I've written many more details about the background behind the creation of BC9 at https://www.beyondcloudnine.com/Background.aspx.

Did you know you wanted to be an author when you were little?
Yes, I wrote my first novel, Crystalia, in late elementary/early middle school. The book filled two five-subject notebooks, if you remember those thick beasts from back in the day. My novel Destalis, which remains a work in progress, is loosely based on Crystalia. I also wrote the first couple chapters of the first draft of BC9 in high school, so I've been going strong since I was fairly young.
I've written a little more about this at https://www.beyondcloudnine.com/Background.aspx and https://www.gregspry.com/earlyworks.php.

Any Pet Peeves?
Too many to list. Let's stay positive.

The weirdest thing you've ever done?
I once shook and thanked someone I didn't know very well when a random thing they said gave me a great plot idea. There's also a scene from the Simpsons where Homer runs/twirls in a circle yelling "woohoo" while on the floor. I reenacted this scene upon publishing my first novel.
Is there a soundtrack to the book/Favorite music?
Ha, this is an awesome question. BC9 doesn't have an official soundtrack and probably won't until JJ Abrams, James Cameron, or Steven Spielberg produce the movie. While my musical bread and butter has always been alternative (most poetic/abstract lyrics), I often listen to techno/trance, electronic, and sci-fi scores when writing. From those genres, I've compiled a play list of songs that I think would work well in the background of the movie.
There's a song I randomly stumbled across on SoundCloud titled "Twisted (Mac & Taylor Remix) by Amy Rose." To me, the song feels very dystopian, sets the mood of the main character and story, and would work perfectly when zooming in on the planet Jupiter to open the movie. I also tend to imagine the song "Distant Worlds (Carl B Remix) by Amex and Saint Rush" playing at the end of BC9 as the main protagonist realizes where she is and into the end credits.
Overall, if I had the opportunity to produce or direct the movie, the score would consist of electronic and modern classical elements blended together. The straightforward classical scores found in Star Wars and Star Trek movies are kind of "been there, done that" (as much as I love them). Personally, I believe the most sci-fi sounding music can be found in 80's flicks like Terminator. Synthesizers sound more futuristic. I'm also a huge fan of the musical composition done by Yoko Kanno in Anime works like Macross Plus and Ghost in the Shell: Stand Alone Complex. She manages to seamlessly blend classical and electronic in cool and unique ways.

Do you need anything to write?
Just my desktop computer and large chunks of time. I'm most comfortable on a desktop PC with a full keyword and monitor. I can't work as fast on a laptop. It also takes me a little while to get into writing mode, and I'm a slow writer, so unless I have an hour or more available at once, it's hard to get much done. Getting "in the zone" is huge for me. If I'm focused and "in the zone," the words flow and hours can pass without my noticing it. When I'm not "in the zone," it might take me hours just to write a page.
I sometimes listen to music and sometimes need to turn it off to get focused. It depends on my mood at the time.

How long do you write on any average day?
I tend to write in spurts. I can't say I've ever been able to stick to the whole "write X words a day" advice we've all heard. Typically, I reserve one day a week as my writing day and try to get in a full afternoon, evening, and night's worth, which allows me to bust out the better part of a chapter. I'll write throughout the rest of the week as time permits.
It's also worth defining the terms "write" or "writing" in this context. When people think of writing, I think most of us envision typing the prose of the chapters in Word. However, I would also classify brainstorming and outlining as writing, too. On any given day, I may not add to my chapter word count, but I might still come up with a great plot idea in my head or work out what's going to happen in what order in an outline in OneNote.
Give us the number one reason to read your book.
I'd like to think there are dozens of good reasons to read Beyond Cloud Nine: a real main protagonist with a compelling goal, a plot that's not your typical alien invasion, page-turning action, etc. Choosing one is tough, but the top reason would have to be because of my definition of what separates good from great. Good books entertain, but you don’t just enjoy great books. Great books make you think and reflect on your own life. I'd like to think the main theme of Beyond Cloud Nine--would you rather be miserable knowing the truth or happy living a lie--leaves readers considering that question for themselves. 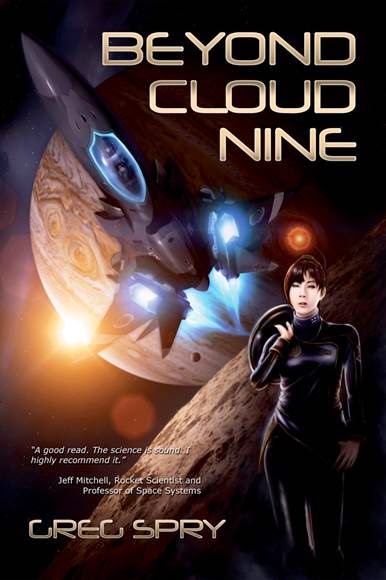 Ace star fighter pilot Brooke Davis lives for pushing hundreds of gees in orbital combat, but she’d give it all up in a moment to become the first human to fly faster than light. When Brooke stumbles upon a conspiracy involving terrorists, aliens, and the highest levels of government, she finds their goals seductive but their methods abhorrent. With the moral core of human civilization hanging in the balance, she must risk her shot at history, her family, and her life to prevent the schemers from forcing their nefarious brand of salvation upon the solar system.
Posted by Valette M. at 12:00 AM